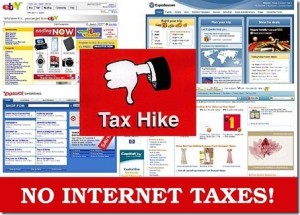 (Chuck Muth) – If you’re a Wal-Mart in Nevada, and someone comes into your store and makes a purchase, you charge that person the Nevada sales tax on the purchase and remit it to the state of Nevada.

Now, when a Nevadan travels out-of-state and, say, shops at a Wal-Mart in Utah, he or she pays the Utah sales tax because the store is located in Utah. The Nevadan doesn’t pay Nevada’s sales tax just because he or she lives in Nevada…which makes perfect sense.

But the Retail Association of Nevada (RAN) wants to change this, at least when it comes to e-commerce.

According to RAN’s recently-announced high-priced PR/lobbying campaign, if a Nevadan purchases a product online from a business located in another state, that business would be required to charge you the Nevada sales tax and remit it to the state. This is part of a multi-state effort to get around a pre-Internet 1992 Supreme Court ruling that mail-order companies do not have to collect sales taxes from out-of-state customers.

So intent is the government on taxing the Internet, they are twisting the Supreme Court decision and declaring that a company is considered located in a particular state even if all the company has is a warehouse there – like Amazon.com has in Fernley, Nevada.

But even that nebulous connection isn’t enough to satisfy the hunger of the tax eaters.

Many ‘net taxers are now claiming it’s not even necessary to have a physical distribution center or warehouse in a state to force the company to collect sales taxes from out-of-state customers; that if the company has an “economic nexus” – something as ridiculously benign as running a radio commercial or newspaper ad in the state! – then they have to collect and remit that state’s sales tax.

And make no mistake: Amazon.com and other e-commerce companies won’t be paying this Nevada sales tax if RAN gets their way….YOU WILL! Make no mistake; this is a tax increase on YOU.

For now RAN and its members only want you to cough up the sales tax for purchases made online from an out-of-state business. But how long will it be before everything you, as a Nevadan, buy out of state – even while on vacation – is charged the Nevada sales tax?

This is so wrong on so many levels, it ain’t even funny – and we haven’t even gotten to the constitutional issues yet!

The Retail Association of Nevada has convinced legislators that this is an issue of “fairness.” It’s no such thing. Not if you’re the poor consumer who will suddenly be forced to pay sales taxes on out-of-state purchases. And not if you’re the out-of-state company that will suddenly be forced to do the government’s dirty work in collecting a tax Nevadans shouldn’t have to pay in the first place.

(Mr. Muth is president of Citizen Outreach and publisher of Nevada News & Views.)