(Thomas Mitchell) – The Las Vegas newspaper, which under previous administrations was reticent to embrace increased taxes, today wrapped both arms around Gov. Brian Sandoval’s proposed increased spending and the tax hikes required to cover it.

I predicted as much at the start of the Legislature. There was a new publisher from the ad sales side of the business — and who ever knew a salesman who could say no? The governor had just visited the editorial board to sell his budget plan. Soon after the paper editorialized:

“Gov. Sandoval needs support from both parties to pass his $7.3 billion budget, the tax increases needed to fund it, and the K-12 improvements that will result from it.” 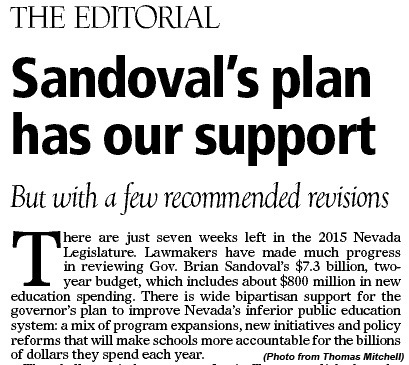 It concluded by telling the governor he needs to “rally the divided Republican Assembly caucus and convince all Nevadans that his plan will position the state for a prosperous future. He must lead like few governors have led before.”