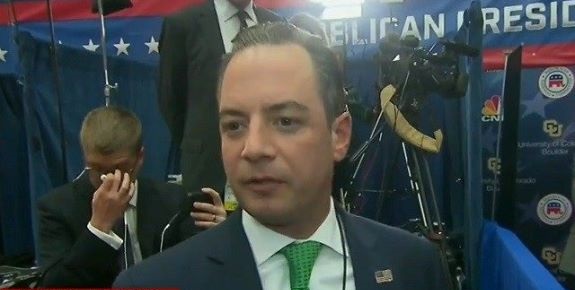 Reince Priebus, Chairman of the Republican National Committee, in an interview during the 3rd GOP Presidential Debate.

(Richard Viguerie, ConservativeHQ.com) – Wednesday night’s CNBC Republican Presidential Primary Debate was one of the worst examples of media bias I’ve seen in my 50+ years of involvement in the conservative movement at the national level – my friend Brent Bozell of the Media Research Center called it “an encyclopedic example of liberal media bias.”

And Brent was right.

Democrats, not being the Party of Stupid, never buy into the idea that a “debate” is a nonpartisan affair.

As I documented in my book TAKEOVER, in 2008, under pressure from liberal groups and blogs, the Democratic candidates for President bailed out of a debate to be hosted in part by Fox News forcing Nevada Democrats to cancel the already scheduled nationally televised event.

And that begs the question, “Who handed over the power to set the agenda in the Republican Primary to Hillary Clinton’s agents in the far-Left establishment media?”

The answer is Reince Priebus, Chairman of the Republican National Committee.

After what establishment Republicans claimed was damage to the candidates by having too many debates in 2012 Priebus allegedly took personal control of the debate calendar, chose the locations and limited the number to six in 2015, followed by four more in 2016.

Why Priebus chose the University of Colorado at Boulder – one of the most liberal universities in the country, in a community where there are a relative handful of registered Republicans – is a mystery only an establishment Republican could unravel, but it provided plenty of student volunteers and a picturesque backdrop for virtually every liberal interest group that wished to parade their cause in front of the national TV cameras.

Although Mike Deaver, Ronald Reagan’s longtime aide and image-maker, was not a movement conservative he understood the power of non-verbal communication; location, lighting, who was in the picture, even what President Reagan wore were carefully chosen to communicate – although he didn’t always get his way since he was rumored to regularly try to dissuade the President from wearing a favorite brown suit.

Priebus and his minions at the RNC have none of Deaver’s understanding of non-verbal communication – especially when it comes to communicating with conservatives.

If a university location was desired why not Hillsdale College, the academic center of the modern conservative movement, or Grove City College, another iconic conservative institution, or if a location in a “purple state” like Colorado was deemed necessary, how about Colorado Christian University?

Then imagine a debate with a media panel made up of Laura Ingraham, Mark Levin, Sean Hannity, and Rush – or an evenhanded media referee like Michael Barone addressing questions from actual registered Republican Primary voters?

Imagine the message that would send to America’s grassroots constitutional conservatives and Christian voters, without whom no Republican can win the presidency?

Of course part of the problem is that Mr. Priebus is so insulated inside his establishment Republican bubble that he likely has no clue about the make-up of today’s vibrant conservative colleges and universities.

In fact, as I see it, the big problem is, and long has been, that the RNC and its leaders are clueless about the conservative movement and its institutions and adherents; other than to come around every four years begging for our votes to save the establishment candidates, like Mitt Romney, John McCain, George W. Bush and Bob Dole, that they have shoved down our throats through an insider manipulated primary election process.

Reince Preibus was elected Chairman of the Republican National Committee in January 2011. Unlike the wise Republican leaders who built the Reagan coalition by welcoming new voters into the Republican Party, Priebus has done all he can to drive limited-government constitutional conservatives out of the GOP.

In my book TAKEOVER, I listed Reince Priebus in my Rogues Gallery of establishment Republican national political figures whose defeat would advance the conservative cause because since the day he was elected he has actively worked to dilute the power of grassroots Republican activists and put more power in the hands of the inside-the-Beltway Washington elite.

The CNBC debate, its host network, media panel and location were the ultimate result of that top-down, inside-the-Beltway-centric thinking.

The bottom line is that the establishment media should not be put in charge of managing the debates, because only the Party of Stupid would put their sworn political enemies in charge of setting their campaign agenda before record national TV audiences; 14 million for the CNBC disaster (a record for the network) and a record 23 million for the CNN debate.

The good news is that some of the Republican presidential candidates, such as Dr. Ben Carson, have decided to stop letting the Leftwing media and the Republican establishment make punching bags out of them and are demanding as yet unspecified changes in the way the Republican Presidential Primary debates are conducted.

That is a start, and the next logical step in the campaign to get Republicans to stop being the Party of Stupid is to hold Reince Priebus responsible for handing over the power to frame the issues in the Republican Primary Election to our opponents.

You can do three things to accomplish that goal.

First, just as grassroots activism helped drive a failed John Boehner from the Speaker’s office and stop the feckless Kevin McCarthy from succeeding him, grassroots activism can hold Reince Priebus accountable for the disaster of the CNBC debate. We urge you to call the RNC at (202) 863-8500 to tell Chairman Priebus you demand that all 2016 debates be renegotiated to take control away from Hillary Clinton’s agents in the liberal media, and to ensure that the questions grassroots constitutional conservatives want answered, get asked.

It might drive home the point to also tell him that you will not contribute to the RNC or any of its committees until national Republicans stop being the Party of Stupid.

Second, many of the presidential campaigns have decided to meet this Sunday to demand changes in how future debates will be handled. We urge you to contact your preferred candidate to let their campaign know that you support them, and that the Republican candidates must seize control over a debate process that RNC Chairman Reince Priebus has handed over to the agents of Hillary Clinton in the Leftwing media.

Tell your preferred Republican candidate for President that any Republican candidate who is smart enough to be president ought to be smart enough to see that the way to defeat the Democrats is to stop letting liberals like John Harwood, George Stephanopoulos, Anderson Cooper, James Lehrer, Martha Raddatz, Candy Crowley, and Robert Schieffer set the agenda through these debates.

Third and finally, CNBC is part of NBC, which is part of the Comcast empire. The CEO of Comcast is Brian L. Roberts. Last presidential cycle Comcast’s Brian L. Roberts donated $10,000 to the Democratic Party of Pennsylvania (the state where the company’s headquarters are located); $4,000 to the Democratic Senatorial Campaign Committee; and $20,000 to the DNC Services Corporation. We urge you to call Comcast Shareholder Relations at 1- 866-281-2100 or Comcast Public Relations at (202) 379-7107 to let them know that you are on to the scam and that you demand an end to the use of Comcast’s monopoly power to advance the agenda of the Democratic Party.