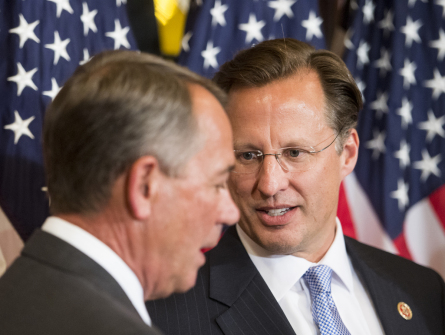 Brat is one of three Republicans whose district is most likely to change. (Photo by Bill Clark, CQ Roll Call)

In a state President Barack Obama carried twice, their party holds just three seats in the 11-member delegation. With a new round of redistricting coming up next month, the question now is which districts get rougher for Republicans.

A federal district court has given Virginia until Sept. 1 to redraw the lines of Democratic Rep. Robert C. Scott’s 3rd District, which it has twice ruled is unconstitutionally packed with blacks. The district runs along the James River between Richmond and Hampton Roads and is currently 57 percent black, according to 2013 census data.

Democrats expect to pick up at least one seat from a wider distribution of black voters, which means one of the eight Republicans may be in for a tougher re-election.

The General Assembly is tasked with hashing out a new map. Last week, Democratic Gov. Terry McAuliffe called for an Aug. 17 special session to begin the process. But in any redistricting — often called an “incumbent protection program” by both sides of the aisle — it’s the congressional delegation that has the most influence.