Roll Call: Day One Pledges – What GOP Candidates Would Do

Roll Call: Day One Pledges – What GOP Candidates Would Do
N&V Staff 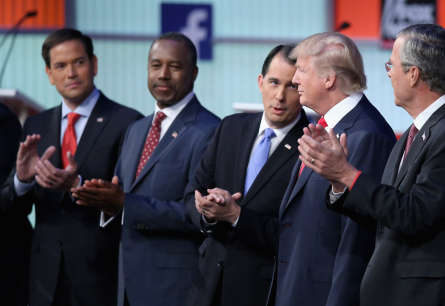 GOP presidential candidates have projected ambitious goals for their first day in office, if elected president.

(Eli Yokley, Roll Call) – Inauguration Day 2017 could be a busy one if you take the pledges from Republican presidential candidates at their word — most have lofty goals for their first day in the Oval Office.

To be fair, the current resident of the White House had his own pledges — then-Sen. Barack Obama promised to “give the military a new mission: ending this war” in Iraq on his first day in office – a promise he did keep eventually. But his pledge to “launch the most sweeping ethics reform in U.S. history” had mixed results despite an Inauguration Day 2009 executive order.

Donald Trump: The Republican front-runner said last month he would immediately boot all of the immigrants who have moved to the country illegally on Day One of his presidency.

To read the pledges of other GOP candidates, click here.