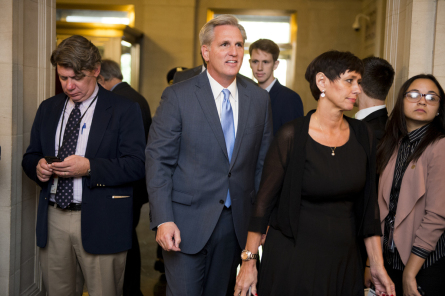 “I am not the one” are the final words of House Majority Leader Kevin McCarthy when he announces he is leaving the race for House Speaker. (Photo By Bill Clark, CQ Roll Call)

(Emma Dumain & Matt Fuller, Roll Call) – House Republicans were in disarray Thursday after House GOP Majority Leader Kevin McCarthy unexpectedly took himself out of the race for House speaker. “I am not the one,” the California Republican told colleagues inside the room, according to Rep. Tim Huelskamp of Kansas.

The move left the party scrambling to figure out who might step up in McCarthy’s place in the race and raised new questions about how House leaders would handle a series of upcoming deadlines related to the debt limit and fiscal 2016 spending.

The first step in the speaker selection was supposed to start at noon Thursday, but members emerged from the Ways and Means Committee room saying that the elections had been postponed.

In a 1 p.m. news conference, McCarthy said: “We need a new face. … I don’t want to go to the floor and win with 220 votes.” Speculation was rampant about why McCarthy withdrew — and some of his fellow members offered their own takes. Rep. Charlie Dent, R-Pa., said on CNN he thought McCarthy “was not confident that he could get the 218 votes on the floor.”