Roll Call: More Democratic losses could be on the horizon

Roll Call: More Democratic losses could be on the horizon
N&V Staff 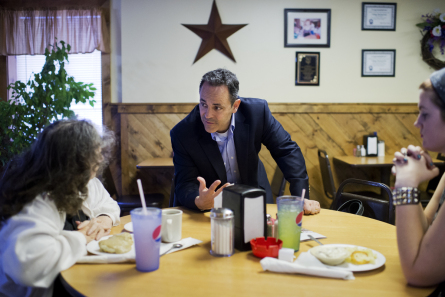 Bevin, shown during his unsuccessful Senate race in 2014, is more popular in Kentucky than inside the Beltway. (Photo by Tom Williams, CQ Roll Call)

(Nathan Gonzales, Roll Call) – For Democrats anxious to turn the page from a terrible 2014 cycle, the news might get worse before it gets better.

Last fall, Democrats lost control of the Senate and fell further into the minority in the House, but pinned much of the blame on low turnout in the midterm elections. Party strategists were more than ready to look ahead to 2016, when the presidential race should boost turnout among Democratic constituencies. But at least one race this fall could dampen some of the Democratic enthusiasm heading into next year.

Democrats should have the advantage in Kentucky’s race for governor in November, since term-limited Gov. Steven L. Beshear is popular and Democrats have held the governorship for all but four of the last 43 years. The party has rallied behind Jack Conway, the telegenic state attorney general with two statewide victories under his belt, while Republicans have a divided party. Matt Bevin won a competitive GOP primary but is despised by some Republicans for challenging Sen. Mitch McConnell last year. And Republicans just installed a new state party chairman, fewer than four months before Election Day.

For all of those reasons, it was widely assumed that Democrats had the upper hand in the race. But there is some evidence that Democrats are at risk of losing in Kentucky, including a public poll which showed Bevin with a slight advantage.