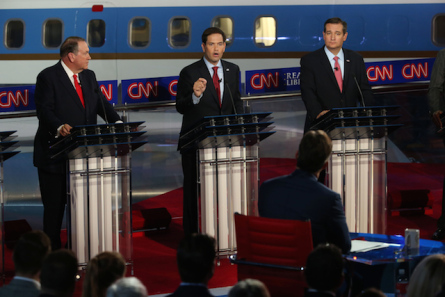 (Stuart Rothenberg, Roll Call) – Given there are still four and one-half months until the Iowa caucuses, why would any Iowa Republican make a final decision right now about which candidate he or she will support?

Yet that didn’t stop CNN from treating Wednesday night’s GOP debate at the Reagan Library as the Super Bowl, with a countdown clock and the suffocating self-promotion that we have all come to expect these days.

CNN spent much of the debate baiting each candidate to attack his or her colleagues, hoping to create what professional wrestling used to call a royal rumble — when all of the contenders enter the ring and beat up on each other until a single hopeful has survived.

Of course, all of that is scripted in professional wrestling, so CNN repeatedly had to try to create verbal fisticuffs to make sure that the combatants would leave enough blood on the ground to make things interesting.

N&V StaffOctober 4, 2022
Read More
Scroll for more
Tap
Will the GOP establishment support Trump if he gets the nomination?
5 Reasons serious TV debates are impossible