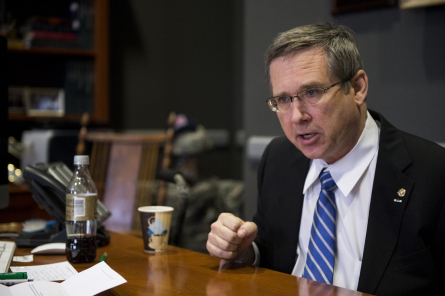 Kirk has spent some of his campaign’s cash on an early bio ad to aid his re-election hopes. (Photo by Bill Clark, CQ Roll Call)

More than a year out from Election Day 2016, Republican incumbents and GOP-aligned outside groups have shelled out at least $13.3 million to boost their re-election prospects and attack potential Democratic challengers in Senate contests across the map. That’s seven times more than the $1.9 million Republicans spent by this point last cycle — when the GOP was looking to win the Senate majority for the first time since 2006.

Republicans are defending 24 seats this time around, nine in states that President Barack Obama carried at least once. If they lose five — or four if Democrats win the White House — the Senate majority will slip from their grip. Drawing a comparison between this cycle and the last presidential election doesn’t paint an accurate picture because super PAC spending was still in its infancy in 2012.

By this point in the 2014 cycle, when Democrats were defending the lion’s share of Senate seats, GOP spending totaled around $1.9 million, according to a source who tracked ad buys. A majority of the spending — roughly $1.1 million — was in Arkansas, where now-former Sen. Mark Pryor faced the most daunting path to re-election. Pryor ultimately lost to now-Sen. Tom Cotton by a stunning 17-point margin.