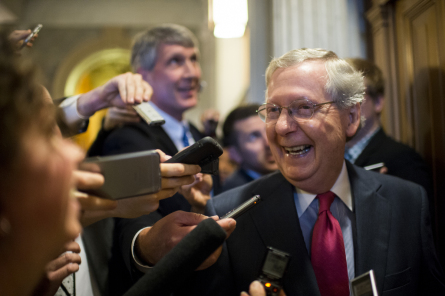 (Niels Lesniewski & Matthew Fleming) – After no shortage of fits and starts, the centerpiece of President Barack Obama’s trade agenda — Trade Promotion Authority — is finally heading to his desk.

The Senate voted 60-38, to clear a measure that would revive “fast-track” Trade Promotion Authority. That vote was not in doubt, with the bill having gotten the critical 60 votes needed to limit debate on Tuesday.

“This bill will help farmers, ranchers, manufacturers, and entrepreneurs throughout our country get better access to foreign markets and allow them to compete on a level playing field,” said Finance Chairman Orrin G Hatch, R-Utah. “This bill will help give these job creators – and the workers they employ – greater opportunities to grow their businesses which will help create a healthier American economy.”

In a rapid series of votes ahead of the 7th annual Congressional Women’s Softball Game, senators were pressing ahead votes to limit debate and pass a broad trade-preferences measure with an extension and expansion of Trade Adjustment Assistance attached.

That program, which provides support to workers who may lose their jobs from negative effects of trade, was expected to advance through the Senate despite opposition from Majority Leader Mitch McConnell, R-Ky., and many other Republicans. But, McConnell knew the TAA measure was needed to secure the Democratic votes to grant the current president and the next one authority to negotiate trade pacts with an expedited Congressional review.