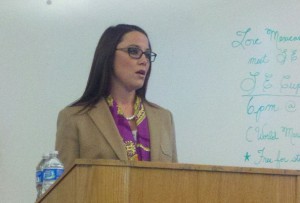 (Lori Piotrowski) – “Occupiers are an intellectually dishonest group,” said S.E. Cupp, addressing more than 50 listeners this afternoon. The group didn’t spring up naturally, she continued, “it was ginned up by Obama to incite class warfare,” mimicking the president’s language to sell initiatives like health care and stimulus packages.

“The Us vs. Them is meant to divide and polarize and get him re-elected,” Cupp explained.

She was in town, by invitation of the UNLV College Republicans, talking about conservative fiscal policies.

Wall Street Occupiers don’t understand that they’re radicals who are in fact upholding the doctrines they claim to be railing against. “They are pawns, taking power away from individuals and giving power to a small group of people in government who will make all the decisions.”

Cupp compared the OWS protestors to the famous, and infamous, protests that had taken place throughout U.S. history, such as those Susan B. Anthony led for women’s voting rights. She wryly noted that “When Kanye West shows up at your protest wearing $30,000 jeans and railing against the economy, you know protests have seen better days.”

The crowd, mostly young college students, supported a variety of the Republican candidates still in the running, although a majority loudly supported Ron Paul.

Cupp acknowledged the devotion of Paul supporters but adamantly stated he would not be elected. She recognized that half of his policies were great, mostly those that focused on national and fiscal issues, but that the other half “was crazy. If Paul were president, we would have no national policy at all.” Seeing what has happened in Libya, for example, where Obama and his coalition entered the Libyan Arab Spring with no plan, no agenda, “was amazing. Now we have no idea of the devil we’ll be dealing with.”

Cupp, author of Losing Our Religion: The Liberal Media’s Attack on Christianity and Why You’re Wrong About the Right: Behind the Myths: The Surprising Truth About Conservatives, turned the focus back to fiscal conservatism by talking about what affects her most in her day-to-day life–taxes.

“Big government in my pocket, that’s what affects me most,” she said. She then compared two quotes that had appeared in Our Sunday Visitor, a publication for Catholics.

The first, by Congressman Paul Ryan (R-WI), said, “A budget with low taxes, spending restraint and less borrowing can help restart the economy, create jobs and increase resources for investment, charity and assistance for the needy.” Ryan advocates that a moral imperative exists for balancing the federal budget.

The second, by Stephen Schneck: “But it’s wrong — it’s immoral — to do this by shredding already stretched safety nets that save lives and give a bit of dignity to those in need. Maybe the rich can forgo more tax breaks? Maybe we can reduce some giveaways to Wall Street? Maybe we can trim weapon systems that the military does not even want? Before we cut Medicaid funds for our elderly and needy, or take food stamps away from hungry kids or slash programs for at-risk moms and babies,” demonstrates the liberals’ desire to expand government while taking money from those who “deserve” to pay more.

Candidate Rick Santorum, in one of the debates, brought up the need to remember the family when working with the federal budget, which Cupp explained, is a point that should be given more emphasis by whoever the Republican candidate is after the primaries.

“The approach to social issues doesn’t have to be emotionally loaded,” she explained. “A moral imperative provides ways for us to support those issues that are important to us. Avoid the divisive issues by focusing on fiscal issues in a compelling way.”

Come November, 2012, she said most voters will have an existential decision to make: “Do I vote to make a point or do I vote to win? It can be a bitter pill to swallow.”