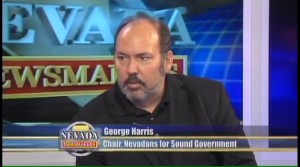 Harris: Faraday deal a slap in the face to entrepreneurs who are sending checks to Carson City instead of collecting favors and handouts for partnering with the state.

After caving to the left by saddling businesses with a profit-killing gross receipts tax, the governor called for a special legislative session last week to approve another buffet of tax breaks and incentives to lure another billionaire automaker, Jia Yueting, to Nevada.

Some huge numbers were thrown around by the governor during his news conference announcing the construction of Faraday Future’s manufacturing plant in North Las Vegas. Over a couple of decades, the Faraday investment reportedly will have an $85 billion impact on the local economy. No details were provided as to how such an absurd number was calculated.

What we know for sure, according to Steve Hill, executive director of the Governor’s Office of Economic Development, is that Interstate 15 and U.S. Highway 93 will need to be improved, and a railyard will need to be created at an estimated total cost to taxpayers of $115 million. The electric car company, which will employ 4,500 people, will receive $217 million in tax abatements over 15 years.

If you’re keeping score, the governor is proposing an investment of more than $73,000 in tax money per job.

When I was in school, we were taught the economic system in these United States is capitalism: Private ownership of assets, with entrepreneurs engaging in dog-eat-dog battles for the wallets of customers. If there’s a place for government at all, it’s only to ensure that private property rights are protected.

But here in Nevada, state government has taken off its referee whistle and become a teammate with certain enterprises, provided the owners are rich enough and the products are politically correct.

They may call this capitalism in Beijing or Havana, but it’s a slap in the face to entrepreneurs who are sending checks to Carson City instead of collecting favors and handouts for partnering with the state.

The Nevada Policy Research Institute’s Center for Justice and Constitutional Litigation sued the Governor’s Office of Economic Development last year for violating the constitution’s gift ban to prevent GOED’s gift of more than $1 million to SolarCity, a business that, according to Assemblywoman Shelly Shelton, R-Las Vegas, is already waving its tin cup in the state’s direction again.

“Get prepared for the protests and cries of unfairness when the money runs out, just like solar companies are doing right now,” she told the Review-Journal while calling Faraday Future, the current apple of Sandoval’s eye, a “welfare company.”

For those who forgot, billionaire Elon Musk never met an easier mark than our governor. As reported last year in the Reno Gazette-Journal, “The overall value to Tesla is estimated to be $1.25 billion over 20 years — a figure that is more than double the $500 million package CEO Elon Musk said would be required to draw the company.”

Mr. Yueting didn’t do quite as well, but every business owner in Nevada would love $9,500 per job in transferable tax credits, a 15-year, 100 percent sales tax abatement and 10-year, 75 percent property and modified business tax abatements.

Instead, Nevada business owners must withstand the shock and awe of the state’s department of revenue and every local bureaucracy that has its hand in their pockets while the governor crows about innovation and entrepreneurship. The reality is the governor’s “New Nevada” punishes real entrepreneurs and promotes crony capitalism.

We can blame the governor for fooling lawmakers once, but shame on legislators for being fooled twice.

(Mr. Harris is chairman of Nevadans for Sound Government. This column was originally published by the Las Vegas Review-Journal)