(Victor Joecks of NPRI) – In campaign materials sent during the 2014 election, Gov. Brian Sandoval told voters that he wanted to “keep taxes low.”

The flyer featured this quote from Sandoval endorsing Roberson:

I strongly support our State Senate Republican Leader Michael Roberson. Michael and I have worked together to create more jobs and get our economy moving again. We need Michael’s leadership in the Nevada State Senate to keep taxes low and reform public education. [Emphasis added.] 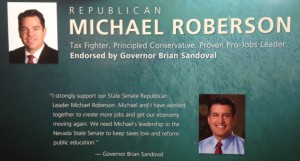 Last week, Gov. Sandoval’s proposal to transform the state business license fee into a hybrid Gross-Receipts Business License Tax was introduced into the Nevada Senate as SB252. Combined with making permanent the sunset taxes that Sandoval previously had pledged to end, his Gross Receipts BLT would, if passed, constitute the largest tax increase in Nevada history.

The 132-page bill — with 164 enumerated sections — would lump every Nevada business into one of over a score of different categories, each with its own escalating tax bill subject to eternal political tinkering.

Roberson has pledged to try and ram this tax increase through the Senate by the end of March. Last spring, however, Roberson was literally sending voters a very different message. Facing a conservative primary challenger, Roberson sent a flyer to voters claiming, “Only one Republican candidate for State Senate … Fights for New Jobs, Fights for Tax Cuts.” [Emphasis added.]

Less than a year later, however, both politicians are beating the drum for the largest tax increase on Nevadans in state history.

This isn’t the first tax flip-flop for either politician.

In 2010, both Sandoval and Roberson also pledged not to raise taxes. On the July 13, 2010, edition of Nevada Newsmakers, then-candidate Sandoval stated:

The bottom line is this. It’s my belief that we have to balance that budget without raising taxes.

However, Sandoval as governor signed extensions of the sunset taxes in 2011 and 2013.

In an interview the day after his 2015 State of the State address, Sandoval revealed that his tax-increase plan was the very reason he ran for office in 2010.

Last night was why I left the bench.  That’s why.  I guess, not the reason.  I left the bench to get Nevada back on its feet and now, to take Nevada to the next level — to help build this new Nevada.  So I am absolutely hyper-focused on this job.

Roberson signed a Taxpayer Protection Pledge in 2010, vowing to voters in his district that he would oppose any attempts to raise taxes. He did just that in 2011, but his policy positions changed as he moved into legislative leadership. He voted for the sunset taxes in 2013; told voters in 2014 he supported tax cuts; and now supports the largest tax increase in state history in 2015.

Raising taxes isn’t Sandoval’s only flip-flop on taxes. In 2013, Sandoval boasted in his Executive Budget Introduction about exempting a company’s quarterly wages of $85,000 from the Modified Business Tax. “This is expected to save businesses $24.3 million in the 2013-2015 biennium as nearly three out of four non-financial businesses subject to the Modified Business Tax in the 2013-2015 biennium will owe nothing,” Sandoval said in his budget document.

Two years later, a major justification for the Gross Receipts BLT is that it’s broad-based, while less than 5 percent of companies pay the MBT. This is an issue Sandoval created with his own policies, but now his team and Roberson are trying to spin this as a failing of the MBT and not Sandoval’s prior policies.

The 5 percent claim is also misleading, because it includes in the pool of total companies around 200,000 business filings where the company, while registered here for tax purposes, conducts no operations in Nevada. Attempts to tax those business will likely lead to a mass exodus to more tax-friendly states, such as Wyoming, and reduce the current business license fees currently paid to Nevada.

These flip-flops highlight a disturbing pattern of self-professed conservative politicians telling voters one thing in an election year, then doing the opposite thing once they’re safely in Carson City.

The actions of those elected officials are part of the reason why politician has come to be seen by so many as a dirty word.