Businesses won’t be the only ones paying the price for bigger, more wasteful Nevada government 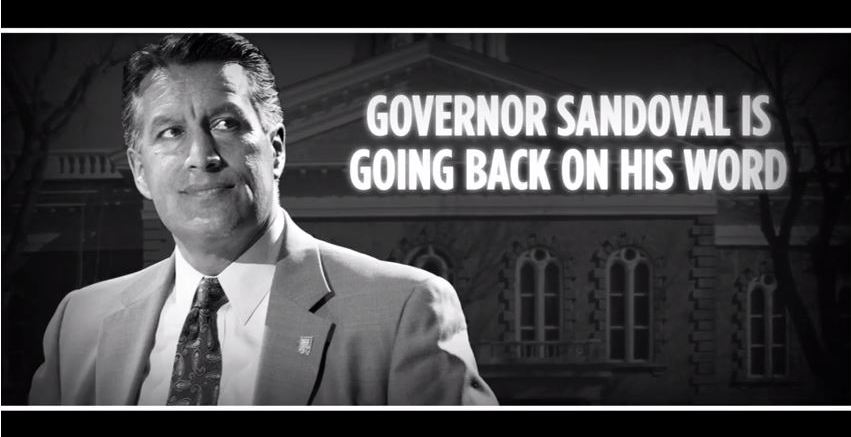 (Chantal Lovell of NPRI) – For much of last year, most Nevada business owners and great numbers of employees expressed real concern over the margin tax proposal looming over the state.

So, it’s safe to say that when voters shot down the measure, 4-to-1, most people believed the businesses they own, work for, or patronize were safe from a debilitating new tax.

Unfortunately, the relief was short-lived.

Though Gov. Brian Sandoval for much of 2014 had presented himself as a vigorous leader of the fight against gross-receipts taxes, he did an amazing — and abrupt — 180. In his State of the State address, he proposed a tax very similar to the one voters had overwhelmingly rejected just two months before.

Suddenly, Sandoval’s intent to impose the largest tax hike in Nevada history overshadowed the more important, necessary and taxpayer-friendly reforms, such as updates to collective bargaining laws and public employee pension reform.  When the initial gross-receipts tax proposal, called a business license “fee,” failed in the Assembly, Sandoval made some tweaks and rebranded the scheme a “Commerce Tax.”

Unfortunately, the gross-receipts Commerce Tax borrows from the defeated margin tax in the worst way: It taxes businesses’ revenue, not profit. While the threshold at which a business must pay the tax was raised to $4 million in revenue, this new tax will still damage firms struggling to attain profitability. Even some operating in the red will have to pay.

The $4 million threshold may suggest to some, incorrectly, that only big businesses will be affected. Not true. Firms in industries with high operating costs — thanks to heavy personnel or goods expenses, for example — will be impacted even if that $4 million merely passes through the company.

Furthermore, all businesses in Nevada must now file a Commerce Tax Return beginning next year, when the new levy goes into effect, regardless of whether they reach the $4 million threshold. Accountants and lobbyists are the big winners here.

It’s worth noting that at the time Nevada politicians were crafting this new tax, lawmakers in Texas scaled back the very gross-receipts tax Sandoval’s version is based on.

Sandoval also stuck employers with a higher Modified Business Tax. Most businesses will pay 1.475 percent with the quarterly payroll exemption dropping from $85,000 to $50,000. In August 2016, businesses that pay the Commerce Tax will receive a 50 percent credit against the MBT.

The final nail in the business-tax coffin was the raising of the business license fee. Corporations registered in Nevada will see their annual fee increased from $200 per year to $500 per year — meaning that Nevada is now the most expensive state in which to register a corporation.

This will significantly impact the 200,000 companies currently registered in Nevada but physically located elsewhere. New or existing businesses looking to register will find Wyoming offers renewal fees of just $50 a year.

While the new business taxes will indirectly hit employees and other residents through lower wages or higher costs, everyday Nevadans will take direct hits also. Sandoval and his legislators killed a scheduled .35 percent drop in the sales tax, so shoppers will continue to face the higher rate indefinitely. Cigarette taxes will also jump from $.80 to $1.80 a pack.

These tax increases — totaling over $1.4 billion — will be used by Sandoval to fund a General Fund budget that’s rife with unnecessary expenditures. His budget sends more money to multiple departments than their own administrators requested. It also continues pouring big dollars into ineffective, wasteful programs such as class-size reduction.

Governor Sandoval’s budget, in both its tax hikes and its waste, directly contradicts the will of the people of Nevada. In November, when asked to raise taxes, they resoundingly answered “No.”

Not only did they shoot down the margin tax by a 4-to-1 margin, they overwhelmingly elected candidates who, at the time, promised to keep taxes low.

Voters now have a very public list of which lawmakers keep their word, when it comes to keeping taxes low, and which are mere politicians, who will say anything to get elected.