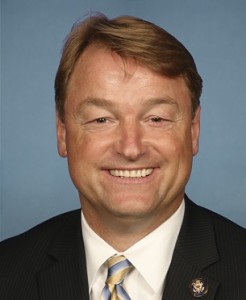 Sen. Dean Heller plans to vie for Gubernatorial position in 2018 when his term will end

(Ray Hagar, Nevada Newsmakers) – U.S. Sen. Dean Heller, R-Nev., said he would consider a run for Nevada governor at the end of his current term in 2018.

Heller’s comments came during a taping of the Nevada Newsmakers TV show.

Current Gov. Brian Sandoval is on his second gubernatorial term and is term-limited in 2018.

“You are probably right,” Heller said when asked if he considers a gubernatorial run in 2018. “I always keep my options open. Frankly, most of those involved in the political process try to keep all their options open. But I just want to reiterate, how thrilled I am to be a United States senator and how much I do enjoy the job, love the committees I am on and will continue to work for the betterment of the state of Nevada.”

When asked if he’d prefer to be the leader of Nevada instead of one of 100 U.S. senators, Heller said:

“I want what is best for the state of Nevada and at the end of the day, if that (running for governor) is what is best for Nevada, I’ll consider it. But right now, I think my role is in the United States Senate and I do enjoy that job.”

Heller, like Amodei, has cited the enormous amount of travel that goes with being a Nevada elected official in the U.S. Congress.

“The worst part about this job are the flights back and forth (between Nevada and Washington D.C.),” Heller said. “I come back every weekend. I have over 2 million miles logged in the last 10 years, flying back and forth from Washington D.C. It is important to me to be back in the state, either Las Vegas or Reno on weekends to make sure we do shows like this have a conversation with your viewers and let them know what is going on in Washington D.C.”

Considering a gubernatorial run in 2018 gives Heller “some wiggle room,” he said.

“You always give yourself a little wiggle room,” he said. “But right now my full attention (is on the U.S. Senate). I really like what I am doing. We’re in the majority (as Republicans) and I sit on the (Senate) finance committee, the banking committee, and the commerce committee. Eighty-five percent of all legislation goes through one of those committees.”