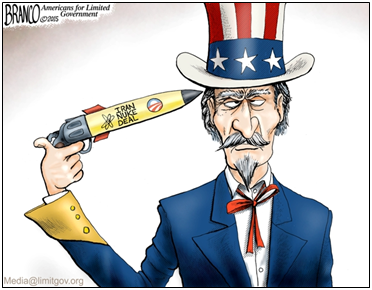 (Robert Romano for NetRightDaily.com) – The Senate is systematically ceding its constitutional power to ratify treaties by a two-thirds majority.

In a 98 to 1 vote, the Senate voted for legislation that will allow a deal that effectively could end economic sanctions against Iran and allow Tehran to acquire nuclear weapons with which to threaten the region and U.S. national security.

Oh sure, members will pretend they are gaining a say in “overseeing” the deal. For example, here was a statement from Sen. Ted Cruz (R-Texas): “Ultimately, I voted yes on final passage because it may delay, slightly, President Obama’s ability to lift the Iran sanctions and it ensures we will have a Congressional debate on the merits of the Iran deal.”

All the bill allows is for Congress to block Obama’s Iran treaty, but only if Obama signs the bill and, in the process, rejects his own negotiations. Why would he do that?

Obama would veto such legislation. In the mean time, 150 House Democrats have already signaled they will be voting to sustain any such presidential veto.

This, just a short month after Senate Republicans wrote a letter to the mullahs in Tehran that it is the Senate, not the president, who approves treaties.

The sole no vote was Sen. Tom Cotton (R-Ark.), who had penned that letter.

“The continued evisceration of the treaty advice and consent process by this Senate is particularly alarming as this vote creates a clear pathway for Iran to achieve its nuclear dream. I expected better,” said Americans for Limited Government President Rick Manning.

He added, “At least Tom Cotton did not bow to the pressure to sanction Obama’s ill-founded policies.”

Like the Iran deal, it will never be submitted to the Senate for two-thirds majority treaty ratification.

Instead, Congress will expedite its process by allowing simple majority votes in both houses to ratify it. A so-called executive-legislative branch agreement — never authorized under the Constitution — it is a pure fabrication of the modern administrative state begun in 1974.

According to Article II, Section 2 of the U.S. Constitution, “[The president] shall have Power, by and with the Advice and Consent of the Senate, to make Treaties, provided two thirds of the Senators present concur…”

With the Iran treaty cave and fast track this week, the Senate has effectively taken an eraser to our governing document.