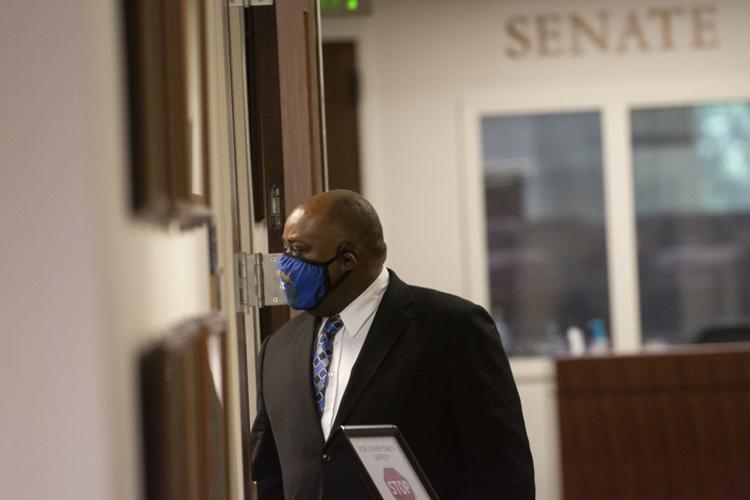 Assembly Speaker Jason Frierson on Wednesday, Aug. 5, 2020, during the sixth day of the 32nd Special Session of the Legislature in Carson City, Nev.
David Calvert / Nevada Independent via AP

“Our state’s ability to recover from this pandemic and build a stronger Nevada will be dependent upon the recovery of our residents first,” Sisolak said in a statement.

“We will focus our efforts on a comprehensive approach that puts individuals and families right at the center,” he continued.

To meet the priorities, the plan proposes funding projects that help students return to in-person learning, provides housing and food security benefits to Nevada families, and invests in job training programs, among other solutions, the governor’s office said.

All dollars allocated to the state from the ARP are intended to be spent by December 31, 2024, the eight-page document says.

“The American Rescue Plan is providing Nevada with critical resources to get the pandemic under control, provide relief for working families, and kickstart Nevada’s economic recovery,” Cannizzaro said in a statement.

“Together with Governor Sisolak and our Assembly colleagues, we’re excited to announce today’s framework outlining how we are going to put this aid to work for Nevada families,” she added.

During his State of the State address in January, Sisolak lamented how the pandemic negatively impacted Nevada’s biennial budget. A majority of his $8.6 billion budget is slated to go toward public education, even though the state anticipates a 2% drop in general fund revenue.

Sisolak has also given schools more flexibility for the upcoming school year by waiving state accountability requirements. The requirements are set by local school district boards and measure school performance based on standardized testing scores.

Meanwhile, state lawmakers have introduced bills to provide schools more security as students return to class. One bill would allow districts to shutter schools for up to 15 days, if necessary.

The legislation was largely written by the Blue Ribbon Commission, a 37-member coalition of local educators, policymakers, and nonprofit organizations convened by  Nevada State Superintendent of Public Instruction Jhone Ebert to recommend policy changes to meet the state’s education needs.