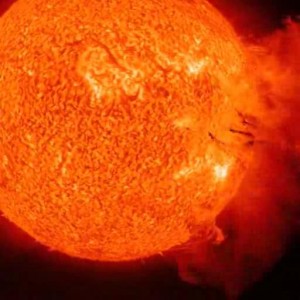 (Earl Wheeler) – Sun erupts with the summer’s strongest solar flare. So reads a headline in a recent MSNBC story. As we suffer from a seemingly un-naturally hot start to the summer, you might wonder what sunspots have to do with the weather here on earth. The short answer is – a lot.

The sun, which provides the life-giving energy needed for our planet is not a steady-state energy producer. The sun goes through several cycles, of which the best known is the 11-year sunspot cycle. The current sunspot cycle is expected to peak in 2013 and, consequently, that is expected to be a turbulent year.

Solar flares are classified according to a system that divides them according to strength. The biggest are known as X-class flares.

On Friday, July 6, NASA’s Solar Dynamics Observatory spotted this summer’s first X solar flare – a giant outburst from the sun at the top of the scale.

There have been 12 M-class flares in just six days, with a M6.1 flare knocking out radio signals across the planet last Thursday. If Earth takes a full blast across its bow, the destruction the sun could cause on our technology is daunting. Conceivably, it could completely disable all satellite communications around the globe.

So what does this mean for our weather? All this sunspot activity has dramatically increased the amount of energy being released by the sun. As that energy radiates away from the sun, some of it will impact the earth causing more energy to be deposited on our doorstep as heat.  This will increase our planet’s temperatures, and some areas may experience record-level temperatures.

Correspondingly, when the sunspot cycle is at its other extreme – very few sunspots – the energy output from the sun drops precipitously and the earth cools.

So, when you hear the inevitable calls about anthropogenic climate change (AKA man-made global warming), you can now educate the misguided souls with real facts.

N&V StaffMarch 11, 2022
Read More
Scroll for more
Tap
Why One Teacher Is Urging Others To Leave CCEA
Will The U.S. Become Like Canada?