(John Philip Sousa IV) – The 2016 Committee just received the results of a national survey conducted by The Polling Company, one of the nation’s most respected professional polling firms.

The results will stun you!

It was a very in-depth survey, with oversampling and crosstabs that provided us with accurate information on the status of Ben Carson in the presidential race.

As you know, our goal is to provide the margin of victory in this race.

We are not the official organization and we will never step on their toes, but as you know, while they can do things we can’t do, we can do things they can’t do.

Remember, it was Mitt Romney’s super PAC, Restore Our Future, that made it possible for him to win the GOP nomination in 2012.

This super PAC has one immediate goal:  Bringing in new people to vote for Ben Carson in the Iowa Caucus and the early primaries in New Hampshire, Nevada, South Carolina and North Carolina.

This was the strategy that the Barack Obama team used in 2008 to defeat Hillary Clinton and win the Democrat nomination for president.

One of the groups we are targeting for first time participation in the candidate selection process is minority voters.

But this was second-hand information.  I never saw the poll results, myself.  My assertion that Ben Carson would run strong with African Americans and Hispanics was also based on the success that our super PAC had when it spent more than $300,000 on radio ads in North Carolina in support of Thom Tillis in his successful 2014 race for U.S. Senate.

Ben Carson said he would not run for president unless the GOP won control of the U.S. Senate in 2014.  Knowing that the Tillis race against Kay Hagen was very close, we zeroed in on that race as well as the Senate race in Louisiana.

Data is still hard to come by in North Carolina, but the fact is that six years earlier Elizabeth Dole won just 1% of the black vote when she was defeated by Kay Hagen.

That’s exactly where Thom Tillis stood at the beginning of the race against incumbent Kay Hagen.  But, by the end of the campaign, Tillis won 11% of the African American vote.

On election eve, on the Fox News Channel, Bob Beckel blurted out that he was looking at an exit poll from North Carolina that showed Tillis winning 18% of the vote in a particular precinct.  Beckel was astounded, saying “that can’t be right.”

That makes sense since the area we reached with our ads was somewhat less than two-thirds of the total black population in North Carolina.  If you do the math, winning 18% where our ads were heard and 1% where they were not heard it comes out to about 11% statewide.

All that is encouraging, but it is not definitive.

Now, I have something that is very definitive to report to you.

It is very encouraging news.

But, I want to be very careful to explain it correctly.

The survey that was conducted by The Polling Company (at a cost of more than $60,000) asked this question after reminding the prospective black voter who Ben Carson is, what he has accomplished and where he stands on the issues:

Dr. Ben Carson is an African-American who may run for President in 2016.  Would you consider voting for him?

When you exclude those who said maybe and those who refused to respond or did not know him, 54% of the African Americans polled said YES!

I was astounded when I saw this number.

I was also excited.

But, my excitement is tempered by three things.

First, the respondents only said that they would consider voting for Ben Carson.

Second, these results are before any attacks on Ben Carson by the left.

Third, before being reminded of who Ben Carson is and where he stands on the issues only 38% of these same voters said they would consider voting for Ben Carson.

Don’t get me wrong, winning 38% of the vote would be fantastic!

If 38% of African Americans vote for Ben Carson he would win every single swing state and a number of states previously considered to be solid Democrat states.

Winning 38% of the African-American vote would mean a landslide victory for Ben Carson.

Interestingly, that 38% vote almost matches other poll results showing that 35% of African Americans identify themselves as conservatives.

Now, let me share the results of the survey of Hispanic Americans.

These results are equally encouraging.

Prior to explaining who Ben Carson is and where he stands on the issues, 52% of Hispanics said they would consider voting for Ben Carson.

After hearing his life story and being told about his conservative stands, including securing the border, 61% of Hispanics said they would consider voting for Ben Carson for president.

Again, these results took my breath away.

But again, these Hispanics are only saying they will consider voting for Ben Carson.

Nevertheless, the real message is that while Ben Carson has a chance to win a very large share of the African American and Hispanic vote, you and I have our work cut out for us.

That’s why I remain excited!

There’s no doubt about it, these poll results confirm everything I have been saying to you in the past.

Ben Carson is the one candidate for president who can not only win and win in a landslide, he is the one candidate who can keep the Democrats from establishing a permanent political majority that will continue to tear down America and eventually kill off the American Dream.

Of course, our first and biggest challenge is winning the Republican nomination.

Sad to say, the Republican establishment just doesn’t get it.

They think they can keep on winning without being a true national party that contests for every vote—white, black, Hispanic and Asian.

That’s why they always want to go with the “safe” candidate like John McCain and Mitt Romney.

But the demographics show that is a dead end street that leads to extinction of the GOP. 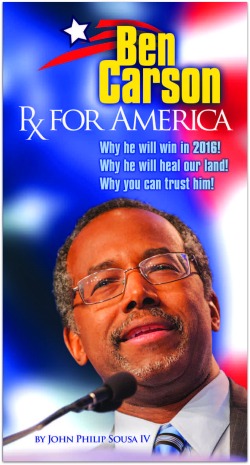 I have previously told you about the new book I have written that makes the case for Ben Carson.  It’s called “Ben Carson:  Rx for America”.

It will be published in five editions—softcover and hardbound in English, softcover in Spanish, on audio and Kindle format from Amazon.

And, just so you know, I will be taking no royalties from the publication of this book and the publisher, Kaleidoscope Publishing, Ltd., is donating its services.

It will be off the presses in about six weeks.

Mr. Sousa is Chairman of the 2016 Committee, an organization that utilizes a multi-channel fundraising and builds a national grassroots organization in support of the presidential candidacy of Ben Carson. Visit www.2016Committee.org for more information.