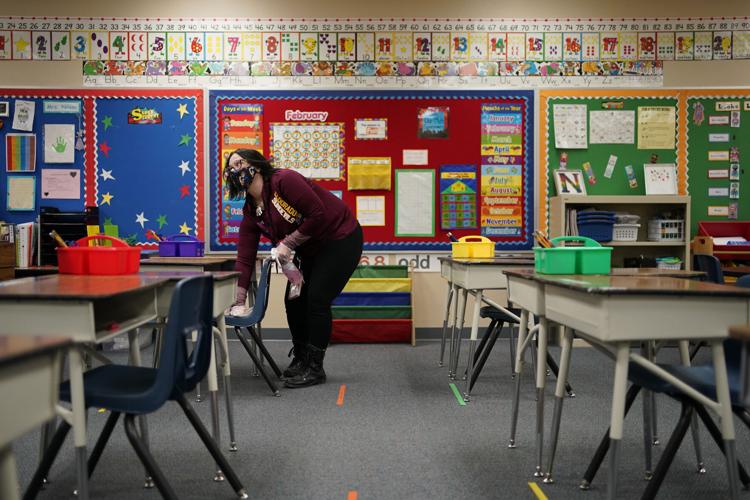 In this Feb. 25, 2021 file photo Tia Baker cleans a desk in a classroom during a media tour at Dorothy Eisenberg Elementary School, in Las Vegas.
AP Photo/John Locher

The results show 68.3% of students participated in the tests, while just 41.4% of students showed proficiency on both the English and math tests – a 7% drop from the 2018-2019 school year.

Federal law requires states to achieve a 95% participation rate on these tests, but several states – including Nevada – were granted waivers as the pandemic forced several schools to move to remote learning models.

Clark County’s schools performed the worst out of all districts with its student proficiency dropping 16 basis points.

If Clark County’s scores were removed from the equation, Nevada’s proficiency scores would have dropped by four basis points when compared to 2018-2019, according to the results. The total would have put Nevada’s student proficiency score two points higher than the national average.

“We are grateful for the herculean efforts educators and families across Nevada underwent to ensure students continued to learn despite the numerous obstacles they faced last year,” state Superintendent Jhone Ebert said in a statement.

“Because of the impacts of the pandemic on education, assessing the quality of schools’ support of students is not a valid use of this year’s assessment results; however, the assessment results can tell us how our students are doing and support us in advancing equity through our efforts to close opportunity gaps between and among student groups,” she added.

To help mitigate the impact of last school year on students, NDE will receive more than $358 million under the federal American Rescue Plan Act.

The department plans to spend $7.5 million to bolster mental health resources in charter schools and more than $10 million to help support after school programs across the state.

The State Board of Education also has a plan in place to increase student achievement by 50% over the next five years.