Stock: Back In The Saddle

Stock: Back In The Saddle
N&V Staff 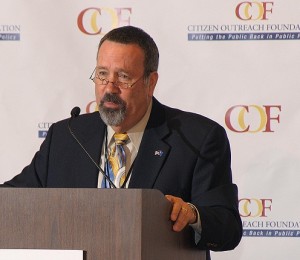 A couple of weeks ago, KXNT listeners were surprised to learn that Alan Stock had been let go. We did a story about it at the time, and we circulated a petition to support one of Las Vegas’ radio icons. Never one to stay down, Stock will be heard Monday through Friday, 11:00 a.m. – noon, on 720AM KDWN. We spoke to him about what happened and his plans for the new show. – Ed.

Q: Your listeners were dumbfounded when you abruptly went off the air. Can you talk about what happened at KXNT?

Most of my talk radio audience ranged from 45 years and on up…most being above the age of 50. These folks had been loyal to me for the past 12 years, and the last thing I was going to do was to throw these people under the bus. The word gratitude was not in the lexicon of my superiors at my former station.

I saw many of these listeners at a few events since I left the old station (a gathering for Mark Amodei, First Friday Nevada, and an event held at the South Point to honor Purple Heart veterans). These people all expressed their concern and support for me. Why in the world would I want to alienate these great friends?

Nonetheless, that was the edict from these people who were very new to Las Vegas and had no idea what this town is all about. In addition, they probably felt they could find someone younger, more pliable—someone who would settle for less than half the salary that I was making.

They did use the excuse that I concentrated on politics too much (which wasn’t true) and that my politics were too “right-wing” (I plead guilty, but with no apology). I could not be who I am not.

My only regret was leaving so many incredibly supportive and talented colleagues. My heart is with them and I wish them all nothing but the very best.

A: Starting on Monday, August 15th, I will be on the air at the heritage station KDWN, a Beasley Broadcasting company. My interaction with them so far is such that they are supportive and want me to be who I am on the air. There are many, many former CBS refugees at Beasley, and I’m looking forward to working with them in a much more supportive and creative environment.

Q: How will this program be different than the one you did earlier?

A: There will be no real difference. What I was doing for the past several months since they let me do what I do best was working. At KXNT, I had eight lines lit for three solid hours. I will mix political issues with lifestyle issues that will challenge listeners and make them think. We will continue to take plenty of calls and I will continue to be respectful of my listeners whether or not I agree. You can disagree with someone without making a fool of yourself. Fortunately, my former co-host Heidi Harris understands this from 5 until 9 in the morning, and I will continue with that same attitude at 11 every morning.

Q: What are your goals with this new program?

A: To continue entertaining and engaging local talk radio that gives local listeners a chance to respond and interact. We will continue with our various features, including the R-J Headliner series (a weekly interview with various people from the Las Vegas Review-Journal), the Pet Pick of the Week, and Movie Reviews. The most obvious goal is to kick the butt of KXNT in ratings, revenue, and in the quality of local programming. They will not be able to compete with us.

Q: Do you have other projects in the works your listeners should be aware of?

A: I’m working with someone who is helping me get a schedule together to start speaking regularly before various groups. I don’t want to say much more at this point, but will let everyone know when it is ready to launch. I’m also working on two books. One of those books will be about my history in radio and include a very honest assessment of the talk radio industry. I’ve got to run it by the lawyers first to make sure I don’t leave myself open to any lawsuits.

Q: What do your listeners not know about Alan Stock?

A: A few years ago I began studying with Rabbi Yitzchak Wyne from Young Israel Aish Las Vegas, an orthodox Jewish synagogue. The learning sessions completely changed my life. Rabbi Wyne (who does a Sunday morning show at KDWN at 9:00 a.m.) opened my eyes and my heart to Jewish history and laws that were never taught to me in quite the same way. Each day, I become more and more observant of the Commandments and rituals associated with historic Judaism. I know I have a long way to go, but thanks to the Rabbi, I know that for the first time in my entire life I am on the spiritual path to which I can relate and which is having a most positive impact. I think it’s incumbent on all of us to be grateful and to thank G-d every day.

Q: Will we still see you at First Friday?

A: You will continue to see me as the MC at each First Friday, and the new co-sponsor of First Friday Nevada will be News talk 720AM, KDWN. I’m also glad we’re holding it a Mundo, a beautiful and spacious Latin Chic Restaurant in the World Market Center Downtown.

Q: Do you have any final words?

A: First of all, a huge thank you to everyone who has been so supportive of me for the past twelve years and especially over the past four weeks. I will never begin to tell you how much that support has meant to me and my family.