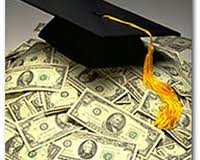 (David Mansdoerfer) – I got into a very interesting conversation this morning with an old grad school friend of mine. We got into talking about President Obama’s upcoming announcement on student loans. The rumor has it that President Obama will announce some form of student loan forgiveness or debt relief. My friend and I, both riddled with student loan debt from graduate school, both agreed that any plan that forgave or reduced student loan debt would be beneficial to both of us. However, even though the plan would equally benefit both of us, we were on opposite sides in our support of it.

As you may have guessed, I am in opposition to a bailout focused on student loans. To be clear, the government should have never been involved in subsidizing the student loan industry in the first place. These subsidies, via grants and subsidized loans, have artificially increased the cost of higher education in the United States.

Now, with student loans coming to the forefront of the public policy debate, the government needs to resist over-reacting and bailing out college grads from their own choices.

At some point in your lives you probably heard the old adage, “people who graduate from college make one million dollars more during the course of their life.” Knowing this, students have hedged their bet that taking on student loan debt will pay off in the long run.

However, now that the economy is in terrible shape, students are walking out of school with tons of student loans and either no job or a low paying job. This, of course, is not good for anyone.

Yet, how can we justify further subsidizing student loan debt when thousands of people have actively chosen to not go to college based purely on financial reasons.

Now, remember, the details of President Obama’s plan have not been disclosed yet. But, if it involves any amount of debt forgiveness or reduction, it will end up benefiting only a select few Americans at the detriment of both the taxpayer and individuals who chose to forgo school based on cost.

In 2009, roughly 30% of the U.S. population had a bachelor degree or higher. If we were to forgive student loan debt, it would be primarily paid for from the tax dollars of those who didn’t go to college. Not only is this inherently unfair, it also acts as a regressive subsidy in that the middle to upper class benefits greatly from the lower middle to poor class.

So, when my friend asked me why I wasn’t supporting a policy that I would have directly benefited from, I responded, “Just because something is beneficial to me doesn’t mean that it is beneficial to this country.”

As I have argued before, reactionary policy tends to be dangerous and inefficient. In this, for all of the people complaining about the wealthy not paying their fair share, how would it look if the poor ended up paying off the student loan debt of college grads.

Ron KnechtOctober 23, 2021
Read More
Scroll for more
Tap
Barry Comes To Town With A Bag Of Treats And Another Trick Up His Sleeve
Fun, Food and Friends at Fourth Friday in Reno