Susan Collins Won’t Support Trump? Why Would She Want Anything To Change? She’s Living Large 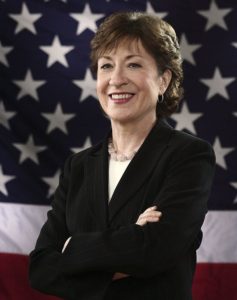 Last week Maine’s senior Senator, Susan Collins, came out against Donald Trump.  She went on Face the Nation to “explain” her “position”.

Watching her, I wondered why I am not surprised that she’s been a Senator for going on 20 years. OF COURSE she’s against Donald Trump.

After all, she has NEVER held an actual job. You know, the kind where your compensation is based on actually earning the money with skills beyond wielding the imprimatur of government authority. In other words, she’s been a bureaucrat or the boss of a bureaucrat her entire adult life.

She began her career as a staff assistant for her predecessor, Senator William Cohen, in 1975. She progressed to become staff director of the Oversight of Government Management Subcommittee of the Senate Committee on Homeland Security in 1981. She was then appointed as the Commissioner of the Maine Department of Professional and Financial Regulation by Governor John R. McKernan, Jr. in 1987. In 1992 she was appointed by President George H. W. Bush as the director of the Small Business Administration’s regional office in Boston. (Note she was a Small Business Administration bureaucrat without ever having actually run a business. Or working in one.) Staying in Massachusetts, Collins became that state’s Deputy State Treasurer in 1993. After moving back to Maine in 1994, Collins became the Republican nominee for Governor in the 1994 general election. Losing that race, two years later, she ran for the Senate and won. She’s married to her former boss, Cohen’s former Senate chief of staff who, himself, runs a defense lobbying firm.

In short, she’s one of those people who are quite comfortable with their cushy job and want NO CHANGE whatsoever.

The last person people like Collins want changing things and making their comfortable world less so is Donald Trump.

In fact, both Collins AND her predecessor were on Face the Nation last week badmouthing Trump in stereo.  Why you’d think Hillary Clinton had hosted her bachelorette party.  Actually, she did. But, I digress…

Collins is part of that group of government people who are just like casino croupiers.  Win or lose, they’re always there to sweep the money off the table. Unlike a croupier in a casino, her peeps don’t ever have to worry about the casino going broke.

But, they KNOW what’s best for us.

Bluntly, much of the electorate is sick and tired of people like Collins telling voters they will do one thing and then, after they are safely elected, doing something else.

Her goal may be to see Trump lose, but if the Republican Party has many more “friends” like her it will only take a few more years to destroy forever.

And then we have the group of “national security experts” which came out against Trump.

These are the people who got us where we are today. They were inside the government when bad decisions were made.  Now, they’re worried about their pathetic Washington careers as experts for hire.

My guess is that the voting public will figure out after the first debate that the only interest being served by this whole group of people is their own self-interest.

My advice for these people and Collins?

Get a real job and stop leaching off the taxpayers. Go get some real life experience. Then, maybe your advice would be worth more than the paper it is printed on.

Some of us think that Trump can and will win.  If he does, the most fun part will be watching you all dance while you suck up.