Thanks To Unions, CCSD Lays Off 1,015 Teachers

Thanks To Unions, CCSD Lays Off 1,015 Teachers
N&V Staff

(Victor Joecks/NPRI) – CCSD Superintendent Dwight Jones warned that an unelected, unaccountable arbitrator from California rewarding the Clark County Education Association’s stall tactics would lead to 1,000 pink slips, and here they are. Via the Las Vegas Review-Journal:

Class sizes will increase and more than 1,000 teachers will be laid off if the Clark County School Board adopts its proposed budget tonight.

The School District must cut $60 million in spending. Officials had planned on saving that money by freezing teacher pay. But the Clark County Education Association, the teacher’s union, fought that plan. An arbitrator ruled in the union’s favor.

As a result, according to a memo sent out Wednesday, 1,015 teacher positions will be eliminated. This will result in classes increasing by about two or three students each.

Now, as Agenda co-host Elizabeth Crum noted today when I was a guest on her show, 1,015 layoffs doesn’t mean that those 1,015 employees won’t have a job in CCSD next year. Pink slips will be given to 1,015 CCSD workers, but after teachers retire or leave, some or all of those teachers will be hired back, although there will be 1,015 fewer positions next year.

This led to a couple of unintentional hilarious tweets from the Nevada State Education Association, including this one. 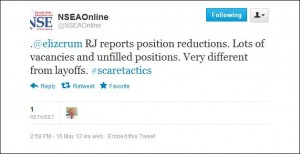 This is funny, because emphasizing the number of layoffs and ignoring vacancies and unfilled positions mitigating those layoffs is exactly what union bosses do during legislative sessions to ratchet up pressure for increasing education funding.

And on this, NSEA would be right — even though I don’t think that’s what the NSEA union bosses intended — because eliminating CCSD’s 1,015 worst teachers would be a boon to student achievement.

Unfortunately, CCEA union bosses prevented this from happening, because they ensured that after 32 teachers were laid off for disciplinary reasons, layoffs will occur based on seniority.

So CCSD’s seven best new teachers will be rewarded with pink slips, students will lose two to four months worth of learning next year and the dance of the lemons will continue. All because union bosses succeeded in protecting ineffective teachers that harm the learning of your children.

If you like this system, thank the union bosses at the NSEA and CCEA.

If you want a better system, the need to eliminate or, at least, seriously reform collective bargaining for public-sector unions and to offer school choice for all parents has never been clearer.