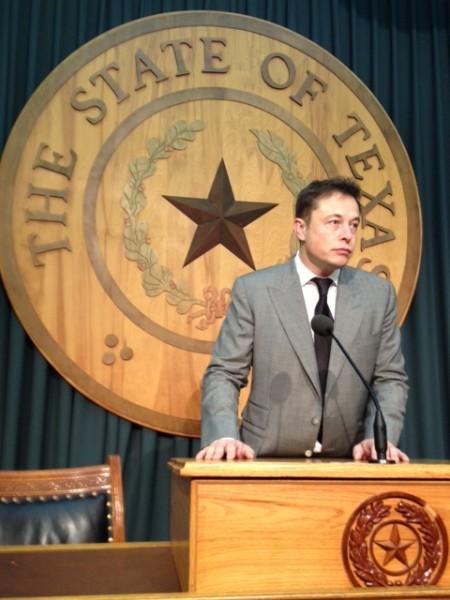 (Seton Motley) – The Myth of Elon Musk is that of daring entrepreneur.  An avant garde, cutting edge businessman who sees a little bit further around the curve of the Earth – to get a glimpse of the Next Big Thing before the rest of us are able to see it.

The Reality of Elon Musk is that of enormous government money welfare hog.  Perhaps the single largest crony capitalist of all to dig in to Washington, D.C.’s $4-trillion-per-year trough (not to mention his multiple-state-level favoritisms).  By far his greatest success – is his copious extraction of government money and favors.

Government has thus far cut checks to Musk to the tune of $5 billion.  This isn’t Musk original thinking – it is decades-old, tried-and-true welfarism.  Musk shouldn’t be lauded and applauded – he should be ridiculed and dismissed.

One of Musk’s fake companies getting billions in real government money is Tesla Motors.  Tesla produces massively-subsidized electric cars which – even with the federal coin – cost way too much and aren’t purchased by anyone outside of uber-wealthy preening elites:

“(Tesla’s) first model, the Roadster, costing over $100,000 per vehicle, sold only 2,400 actual cars in 31 countries from 2006 until production ended in 2012, despite extensive federal subsidies for electric car purchases.  Its new model, a full-size luxury sedan named the Model S, is doing better, costing about half as much as the Roadster. Tesla sold about 25,000 of these worldwide in 2013….The products are heavily subsidized, by both federal and state tax credits of up to $20,000+ to consumers, and zero emissions credits totaling tens of millions of dollars to the company.”

So much government coin – for so little in sales.  And now the Musk contagion is looking to infest Texas.  Musk wants to insert his Tesla Faux-Motors into the Lone Star State’s retail dealership market.  And is demanding even more cronyism to do it.

For starters, the Texas dealership landscape is anything but free – there are massive legal restrictions:  “(T)he automotive marketplace is not currently a free one for Tesla, neither is it for franchised dealers, who are drastically limited in their ability to negotiate freely with manufacturers, due to antitrust prohibitions against them.….Dealers (are) prohibited by the Sherman Antitrust Act from retaliating against manufacturers by banding together to negotiate their contracts….”

I have never been a fan of antitrust law – for several reasons.

When a monopoly actually springs up – and true monopolies are a very rare occurrence – they are the result of millions of consumers choosing A and not B, C or D.  That is the business of business – not government.  And if a true monopoly arises – and abuses its position – it is an open invitation for B, C, and D to re-engage in open competition.  The only thing that can protect a monopoly from the free market consequences of its abusive practices – is government protectionism.

Antitrust law is a wide-open invitation for Huge Government types to massively, endlessly meddle in the marketplace.  Their alleged protections against monopolies suddenly become alleged protection against duopolies, triopolies, and general “lack of competition” – as defined any way government wishes so as to maximize its meddling.

And antitrust laws oft supersede what should be preemptive and preeminent Constitutional rights.  Like auto dealers’ First Amendment freedom to assemble – completely free of government intervention or say.

Having been robbed by the Feds of their rights – dealers “retaliated by winning state regulation restricting dealer termination, controlling nearby direct competition, and in some cases prohibiting direct sales to consumers by manufacturers.”

Into all of this mess, in Texas, parachutes Musk – looking for even more cronyism.  Musk wants to sell his Tesla Faux-Motorcars directly to consumers – thereby bypassing Texas’ dealership laws.  Which would yet again give Musk an unequal, favored playing field.

Short of that, Musk wants – and has convinced some on the Texas ideological Right to join him in calling for – the repeal of the franchise laws.  Done unilaterally, this would be a very bad idea.

This is the problem with multi-level, overactive governments.  The interwoven regulatory result is not a Mr. Potato Head – where you can just piecemeal remove this bit of government or that without any eye on the other attending government pieces.

The reason the Founding Fathers wanted limited government – is because they understood that no one breaks the law of unintended consequences more than government.  A government acts here – and warps the marketplace not just here, but also there, over there and way over there.

In Texas, that means you can’t just remove the dealer laws.  To rid ourselves of them – we must first rid ourselves of the federal antitrust precursor: “(S)imply repealing the dealer franchise laws, as some on the right have suggested, would not leave a completely free market in its wake. Dealers would not be free under antitrust regulation from joining together in contract negotiations to match the market power of car manufacturers….The last time dealers joined up to confront manufacturers over abusive practices in the mid-1990s, the U.S. Justice Department opened an antitrust investigation, and intimidated them into backing off.”

On the main, Texas certainly understands that the free market works – and that government does not.  And as Texas has demonstrated in their struggles with massive, unimpeded immigration – it understands how bad federal policy creates horrific state-level problems.

So it is with Texas auto dealer franchise laws – and federal antitrust.  Like it has with its immigration woes, Texas should call for federal action – to alleviate its state-level problems.

Less government at the federal level – will allow for less government in Texas.  Free from the further market warping of unilateral action.

And it will have the added benefit of not affording Musk yet another raft of cronyism.

Elon Musk is a contagion.  Texas should inoculate itself – not willingly succumb to the disease.