The Importance of Easter

The Importance of Easter
N&V Staff

(Newt Gingrich) – Easter is the most important day of the year for Christians.

On this day, Christians celebrate that Jesus Christ rose from the dead three days after his suffering and death by crucifixion. 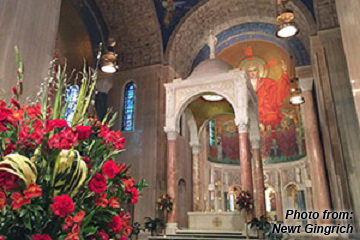 Christians believe Christ undertook his suffering and death willingly on our behalf, in obedience to God the Father, so that all of humanity may have hope for a new life with Him and God the Father in heaven.

At the heart of Christianity is this act of God’s love for humanity. That God would send his one and only Son to die so that we may live.

Easter is exactly the right time to assess the growing threats to humanity, and especially threats toward Christians who always stand in the way of those who would coerce belief and enslave their fellow man.

Christianity today is under siege on two fronts. On one front is a growing secular tyranny which violates the First Commandment and seeks to place human wishes ahead of God. This tyranny also increasingly violates the First Amendment in a campaign to use the power of government to force Christians to violate their religious beliefs.

On the other front is an irreconcilable wing of Islam which, in every country it dominates, is seeking to drive out Christianity. It has been horrifying to watch the spread of ISIS in Iraq, Syria and beyond. It has been equally dismaying to see the treatment of Christians, especially young Christian women, in Nigeria at the hands of Boko Haram, and the countless other atrocities committed by radical Islamist groups around the world.

On Easter Sunday, ask yourself some simple questions.

Do you believe that the Son of God rose from the dead?

Do you believe you can be saved through faith in Jesus Christ?

Do you believe God loves you?

If you answer yes to these questions, isn’t it time to stand up to the growing secular tyranny and the irreconcilable wing of Islam which seek to destroy the religion that offers hope and salvation to us and all of humanity?

It really is that simple, and Easter is the day to think about it.

Callista and I wish you and your family a blessed Easter.