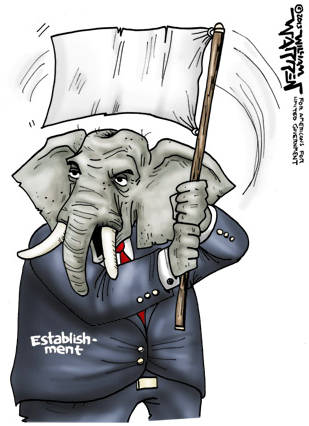 (Bill Wilson, NetRightDaily.com) – Establishment pundits have been desperately trying to explain how Donald Trump has been able to build commanding support that seems to be unfazed by relentless attacks. They confidently tell each other that this is just a summer fling, that the voters will “come home” after they’ve had their fun. Perhaps. But for those truly interested in why Trump has done so well, a stark example was plastered across the editorial pages of the Washington Post last week.

With somber tones and studious analysis, U.S. Senator Bob Corker (R-Tenn.) set out all the reasons why he will vote against the deal the Obama Administration struck with Iran. All the obvious reasons are listed. But Corker himself engages in a bit of spin to cover his tracks. He states in the beginning of his mea culpa, “Congress ensured that it would have the opportunity to review and vote on the nuclear agreement with Iran.” It was the Senator’s own bill that set the terms. What he fails to say, however, is that his bill actually turned the Constitution on its head and guaranteed that whatever Obama brought back from Tehran would be implemented.

Congress, because of the Corker ploy, negated the Constitutional provision requiring all treaties be enacted by a two-thirds vote of the Senate. Instead, Corker’s bill only allows the treaty to be rejected if two-thirds in both houses can be mustered to override a Presidential veto. When pressed on this point, Secretary of State John Kerry commented that passing anything called a treaty is “too hard.” So, we just ignore the Constitution because it is too tough, too demanding, too much of an impediment to this Imperial President and his radical goals.

Bob Corker is no fool; he knew full well that his measure would hand the power to Obama to negotiate anything he wanted. For him now to come out and loudly declare how dangerous the resulting treaty — er, sorry, agreement — is amounts to a level of duplicity never envisioned by the Founders. But it does explain why millions of conservatives and even moderate Republicans are flocking to Trump or outright abandoning the GOP.

Voters have figured out the scam. These establishment politicians come around and stir up the masses with promises to rein in government, stop Obama, repeal Obamacare and the rest of his destructive, anti-American agenda. Once safely in office, nothing ever gets done. All the public gets are little dramas like the Bob Corker double-dealing or yet another vote to repeal Obamacare while refusing to cut off funding.

What is so frustrating to millions of Americans is that the tools are available. Article I of the Constitution sets out the powers of Congress, the duly elected representatives of the people.  Most real power was enshrined in Congress, not the executive. But for the past 100 years, Congress has frantically handed its powers, rights and prerogatives over to the executive branch. In so doing, they are rendering themselves impotent and meaningless.

Congress was intended to be the dominant power, not the least. The power of Congress comes from the Constitution, not nine lawyers in black robes. Congress has the power to brush the Supreme Court and “the lesser courts” aside, their authority is not dependent on anything the Court declares or orders. The executive is fully dependent on Congress for funding. If Congress disapproves of the way the executive is acting, it has the power to impose its will in a variety of ways. All of it is spelled out in Article I. All that is required is for Congress to have the courage and will to grasp the powers the Founders gave it.

One ray of hope is Representative Ken Buck’s founding of the Article I Caucus, where he and a few like-minded House members are dedicating themselves to using the power of the purse to reassert Congressional authority.

For this administrative state — a centrally planned economy, excessive regulation and the elevation of the so-called “expert” to near divine status — to rise, required Congress surrender its power. Over time, that is what has happened under the guise of a “progressive” advance until we arrived at the sad and pathetic place we find ourselves today.

It is a rejection of this state of affairs that has led to the rise of Trump and other candidates disdained as outsiders. The people are telling the weaklings and quislings in Congress that they see through the sham and want no part of it. And people like Bob Corker can pretend all they want, but their childish attempts at dodging responsibility for their perfidy simply no longer sell.

The author is a Board Member of Americans for Limited Government.