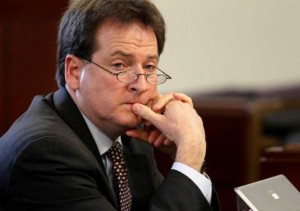 With Rep. Dean Heller’s announcement that he would be seeking the soon-to-be vacant U.S. Senate seat of John “Pants on the Ground” Ensign, a mad scramble has ensued for his own soon-to-be-vacant House seat in Nevada’s 2nd congressional district….assuming the special election will be a free-for-all with all Republicans – and candidates from other parties, as well as independents – who want to be on the ballot on the ballot.

That would appear to include Lt. Gov. Brian Krolicki, who has expressed interest in the seat in the past. However, on April 14, 2011, before Ensign announced his premature resignation, Krolicki released a statement declining to make a decision on seeking the office until after the current legislative session ends, which, at present pace, could be in the year 2525 (“If man is still alive, If woman can survive”…ask your mom).

“Now is not the proper time for a final decision to enter this race and to begin an all-consuming campaign,” Krolicki wrote. “In fact, I think it would be irresponsible to do so. I was recently re-elected to serve the people of Nevada as their lieutenant governor, and there are simply too many issues of consequence being debated in the Legislature which demand all participants’ undivided attention.”

The problem for Krolicki is that he would look like a major league, self-serving, opportunistic hypocrite if he jumps in the race now after less than two weeks ago saying such a decision would be “irresponsible” because the issues in the Legislature demand his undivided attention. I mean, the issues sure haven’t changed in that short period of time; if anything, they’ve gotten worse.

In addition, folks close to Krolicki tell me he and his family, complete with young daughters, are having serious doubts and second thoughts about either pulling up stakes from their beautiful Lake Tahoe home and relocating to DC and/or suffering the challenges of commuting back and forth every weekend.

Which poses a serious political problem for the young, ambitious LG. Having served as Treasurer and now Lt. Governor, there aren’t many political stepping stones up the ladder left for him to pursue after he’s term-limited out in 2014. Another U.S. Senate seat won’t be up again in Nevada until 2016 at the earliest. And there’s no reason to think Brian Sandoval won’t run for re-election in 2014.

Which makes the 2nd congressional district House seat perhaps the only option for quite a while…and the timing of that option isn’t looking too good right about now. So let me suggest another out-of-the-box option for consideration…

Nothing against Patrick McNaught, Amy Tarkanian and Mark Hutchinson – all of whom have expressed an interest in replacing Chairman Mark Amodei after he steps down. But none of them has ever served as a party chairman at even the local level, nor have any of them ever served in elected office. They and the party would be better served by getting a little more seasoning under their belts before taking on the reins as the party’s top state official.

On the other hand, the benefits to the party of a Krolicki chairmanship are numerous and significant.

But why might Krolicki consider taking on a job that has historically been a thankless, frustrating pain-in-the ass?

Because this is a whole new ballgame, with an opportunity the GOP hasn’t seen since Frank Fahrenkopf was chairman. (Who? Exactly. It’s been that long.)

As party chairman, Krolicki would have the opportunity to build a political machine that could benefit him politically for many years to come.

Over the past dozen years, while Harry Reid was building up the Nevada Democrat Party, John Ensign was building up himself, not the GOP. During that same time, Gov. Kenny Guinn had little interest in party politics and Gov. Jim Gibbons was AWOL more often than a Vietnam War draft dodger.

Without the support of the party’s top elected officials, the job of party chairman sucks. Big time.

But that was then; this is now.

And now we have a governor who is committed to rebuilding the GOP party apparatus, as well as getting more Republicans elected to the Legislature in order to advance his agenda. And once Dean Heller becomes U.S. senator, he, too, will have a vested interest in rebuilding an effective, viable, professionally-run GOP party organization.

That, of course, however, depends upon who the party chairman is. If it’s another yahoo like Captain Chris “Dis”Comfort or SpongeBob ChairPants Ruckman…fuggetaboutit.

But if it’s Brian Krolicki….