The rise of the non-politician

The rise of the non-politician
N&V Staff 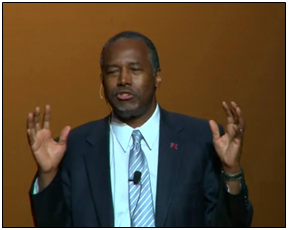 What do these three Republican presidential contenders have in common?

None of them has ever held elective office before.

One of them is a real estate mogul. The other a world-renowned neurosurgeon. And the other a former Fortune 20 corporate executive.

What do they also have in common?

They comprise three of the top five candidates in Iowa, the first important contest in the presidential campaign, in the latest poll by PPP from Aug. 7 through Aug. 9, which was taken right after the first GOP debate on Aug. 6.

Trump led the pack with 19 percent, Carson had 12 percent in second place, and Fiorina came in fifth place at 10 percent.

So far, the GOP has 17 candidates on the ballot, 14 of whom currently hold or have held elective office either as governors or senators. And yet, the non-elected candidates are beating almost all of them.

Now, what does that say?

In part, it’s simply an indictment of career politicians.

It may also point to a failing of the consultancy class that runs these campaigns that are so careful they manage not to say anything about any actual issues. The polls show, when you try to please nobody, you don’t end up pleasing anybody.

With Trump, Carson, and Fiorina, on the other hand, they do not speak like politicians.

Fiorina summed up the phenomenon last month at a fundraiser at Tassle Ridge Winery in Leighton, Iowa, saying, “I have people come up to me all of the time and say, ‘thank you for answering questions,’ ‘thank you for speaking clearly,’ ‘thank you for talking common sense,’ and I was really, of course, gratified by those comments, but then I started to think about it. You know, what a low bar actually. What a low bar when people are surprised that a presidential candidate actually answers a question, speaks plainly and talks common sense.”

But overall, it speaks volumes on the perception Republican voters have for the Republican Party. They must not trust their own leaders very much who have actually held office and presumably implemented policies.

Yet, when Republicans were in charge of both elected branches in the 2000s, voters watched as the national debt exploded; the entitlement state was expanded in Medicare; Washington, D.C. took over local education; amnesty for illegal immigrants was attempted; and at the end of it all, Wall Street was bailed out with trillions of dollars.

And since reclaiming congressional majorities in 2010, Republican Congresses have provided the funds necessary to implement Obamacare; when it came to the fiscal cliff, they allowed some taxes to be raised; and they gave funds to implement Obama’s executive amnesty for illegal immigrants with U.S.-born children.

So, perhaps, voters are fed up with politicians who say one thing when they’re running for office, and something else entirely when they get in.

Now, that is not to say that Trump, Carson, or Fiorina are not capable of breaking their promises, too – just that not having held elective office, they benefit from not having that sort of track record.

Perhaps, that is why the consultants whisper to the career politicians not to say anything meaningful, lest it harms their fortunes down the road when they have to break their promises.

And, yet, the voters are sick of it.

How else to explain the rise of the non-politician in the 2016 Republican presidential field?

It remains to be seen how successful this brand of anti-Washington, D.C. populism will be when votes finally start getting cast in 2016. But at the moment, it represents a mortal threat to the Republican Party establishment that has spent more than two decades cultivating the current crop of candidates — who now appear headed for certain defeat at the hands of a voter-led rebellion against career politicians.