The truth about Bundy vs. BLM

The truth about Bundy vs. BLM
N&V Staff 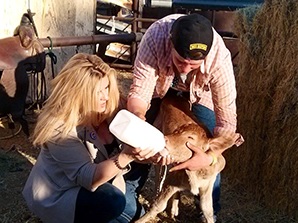 (Assemblywoman Michele Fiore) – I had the privilege and opportunity to learn to make a calf suck a bottle to save her life. It’s going to take a lot to revive the calves that were nearly dead when they were returned to the Bundy Ranch because they had been separated from their mothers during the roundup, and a few most likely won’t make it.

This isn’t my normal, nice, politically correct email, so hang on to your seats. I can tell you that after everything I’ve seen, this roundup was not about grazing fees.

First and foremost, like all Nevadans, I love my country and support my government. I proudly support Nevada being home to military installations needed to defend our nation, the federal government test site to develop the equipment necessary for that defense, and any of the other federal lands and facilities needed to conduct the true business of our federal government. That said, I struggle to see the compelling federal issue of where cows eat.

I spent a majority of my time in Bunkerville over the last week with the Bundy family and their supporters.  During my time in Bunkerville, I couldn’t help but think about Nevada’s upcoming 150th birthday and that the federal government continues to patronize our state by trying to overstep and police our Nevada citizens. I wonder when the federal government will think Nevada is mature enough to set our own grazing rules or enforce our own laws.

I didn’t meet one Nevadan supporting the BLM or their removal of the cows. If Nevadans don’t care about which land is used for grazing, why should a bureaucrat who works for the federal government get to trump that?

I had the opportunity to meet the American-minded Bundy supporters from all over our country.  They were peacefully protesting the BLM’s actions, and I’m excited to report the Bundy family was successful in keeping the peace until the BLM stopped their roundup and returned the Bundy’s cattle.

I’ll also report the actions of some spineless, poor-excuses of BLM staffers. An armed BLM officer picked up Mr. Bundy’s elderly sister from behind, a total sneak attack, and body slammed her to the ground; there is video footage.  This woman is the mother of 11 and just survived cancer.

Following that brutal incident, another BLM officer ordered his dog to attack Mr. Bundy’s son, Ammon, and as Ammon Bundy was trying to get the dog off his leg, the Nazi-minded bully tazed him twice, once in the neck and the second one right above the heart.

As if that wasn’t enough, the brutal BLM thugs beat up Dave Bundy, a pilot out of Las Vegas, detained him, stole his iPad because it contained the brutal footage, confiscated many other items out of his car, transported him to Henderson where he was further detained, then released him in the middle of street.

They didn’t stop there. No, they detained two more young guys while they were herding some more cattle in Overton.

These men and woman are Americans attacking Americans. I’m speechless. If you saw the number of police agencies united, I’d hope you’d be curious. We are talking about dozens of our finest SWAT members from Metro, Metro black & white cars, EMT, fire rescue trucks, detention buses (a.k.a. Paddy wagons), over 50 Ranger and BLM vehicles, numerous highway patrol vehicles, and a Black Hawk Helicopter on the Moapa airfield, just to name a few. We watched the Waco Massacre and Ruby Ridge; was the BLM preparing for a “Bunkerville Slaughter”? I believe in my heart because of these last two disasters, Americans from all over our country traveled from afar to stand with the Bundys and let our government know enough is enough. I’m proud to stand with my fellow Americans.

The numbers do not calculate. The federal government had the authority and an open checkbook to spend 10 million dollars or more for a maximum return of $200,000.  Here’s how I calculate that number:  the BLM might collect maybe 400 heads of cattle, taking into account the number of cattle they would kill while rounding them up. From the round up, the cattle would go to auction. How much do you think you’ll pay for a half-dead, beat up cow? Let’s say they were able to successful auction off 400 cows for $500.00 each (I’m being very very generous). The brainiac head of BLM authorized 10 million dollars or more to maybe recoup $200,000.  Really? As a CEO I’d fire that decision-maker immediately. In their minds, maybe it’s worth getting rid of the cows, or just killing them, so the cows won’t destroy equipment for a project they might want to implement.

The BLM tried to paint their actions as enforcing the law; however, there are several other reasons why the BLM chose to pick this fight. It cannot be a coincidence that the place where the Bundy’s have grazed their cattle for hundreds of years would suddenly become an animal refuge for desert tortoises; is it really desert tortoises? If so, why would the BLM be euthanizing them? That’s right, BLM has EUTHANIZED 700-800 desert tortoises. Trust but verify. Click here to read one of many stories about it.

We’re also seeing reports that the BLM land in Gold Butte is very desirable for energy projects, which may have prompted this sudden strong-arm tactic. Don’t trust me, verify it. Click here to read the BLM’s own report on the project.

A major concern in all of this was how the BLM treated the cattle. It is completely irresponsible that after years of conversations, the Feds would begin their roundup during the season when calves are being born. In this mess, newborn calves were separated from their mothers; some were trampled in their holding pens and left for dead. A helicopter acted as a cowboy to herd the cows, causing a few to have heart attacks and die. The conditions of the holding pens where they kept the cows for days were heartless and cruel. Where was PETA?

I do want to comment about the upstanding citizens who came to show their support, including the Oath Keepers, a non-partisan association of current and formerly serving military, police, and first responders who are committed to defending the Constitution. They are honorable men and women who acted professionally and respectfully.  There were many groups of freedom fighters who traveled from all over our country to stand together. I have a very serious request to all agency officers and that request is, “not to obey your superiors when given a direct order to attack your fellow Americans fighting for the freedoms granted to us by our Constitution”.  Take a sick day or a vacation.

I didn’t become an elected official to join an elite club; I ran for office to protect the people and be a true voice for the people. I take my oath seriously. It’s time for Nevada to stand up to the federal government and demand the return of the BLM lands to the people of Nevada. BLM has shown their true colors and agenda. As elected officials in Nevada, it is our responsibility to be leaders on this issue and work together, Republicans and Democrats, to make sure this doesn’t happen ever again. Together we need to write legislation to protect our state’s rights from the Feds.

(Assemblywoman Fiore is a Republican respresenting District 4 in Las Vegas)