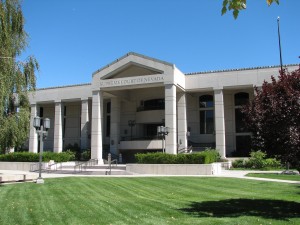 (Thomas Mitchell/4th St8) – When I interviewed Joseph Becker, the newly installed head of the Center for Justice and Constitutional Litigation at the Nevada Policy Research Institute, nearly a year ago, he mentioned that one of the possible objectives of the Institute was to find someone “with standing” to be the plaintiff in litigation attacking the wholesale ignoring of the separation of powers clause in the Nevada Constitution.

This week the Center filed that lawsuit on behalf of an unemployed computer technician.

The libertarian-leaning center at the time of its launch listed potential areas for litigation as: Freedom of speech, assembly and religion, as well as gun ownership, property rights, privacy, limited government and separation of powers.

Becker explained a year ago, and I quoted him in a column, “The Ninth and Tenth amendments are very important to us — separation of powers, leaving to the states what’s the order of the states and even separation of power, making sure the legislative, executive and judicial branch maintain their separate and proper roles.”

This week’s lawsuit argues that unemployed computer tech William Pujonis is harmed by the fact state Sen. Mo Denis unconstitutionally serves in the legislative branch while simultaneously performing a function in the executive branch, specifically computer tech at the Public Utilities Commission. Pujonis is thus blocked from seeking Denis’ job, which he holds in violation of the Constitution, which states:

“The powers of the government of the state of Nevada shall be divided into three separate departments, the Legislature, the executive and the judicial; and no persons charged with the exercise of powers properly belonging to one of these departments shall exercise any functions, appertaining to either of the others.”

As Ed Vogel’s Review-Journal story points out this is not the first time this has been argued. In 2004 the state Supreme Court, rejected a similar suit, saying the state Constitution lets the Legislature set qualifications of members.

That’s why Becker and the Center went looking for an aggrieved party who would be able to show that failing to follow the letter of the Constitution denied the plaintiff due process under the law.

As Vin Suprynowicz explained in his R-J column several months ago, the separation of powers clause was strictly adhered to until about 1964. Even school janitors were not allowed to sit in the Legislature.

This was chipped away by a couple of attorney general rulings until in 1971 Attorney General Bob List opened the flood gates. List held that a person could “exercise powers” as a legislator so long as he didn’t “exercise powers” in one of the other branches. Never mind that the constitutional criteria is “function.”

Vin also related, “In 2004, Attorney General Brian Sandoval — now our governor — issued an opinion holding that state workers should not be allowed to sit in Carson City. But it has never been tested in the courts and is widely ignored.”

In a press release, Becker said, “Allowing one person to exercise power in two branches of government leads to numerous conflicts of interests and invites corruption. It also destroys the checks and balances that were built into Nevada’s government to protect citizens from power-hungry politicians.”

Well, you might ask, in our democratic form of government shouldn’t the voters be able to elect whoever they wish to be their representative? It was no secret which candidates also worked for other branches of government. (Becker estimates that close to 20 percent of the Legislature is in violation of the clause.)

The same argument is made against term limits.

But people forget this country and state were founded not as democracies but as republics, with power being broadly distributed lest one person or group attain too much power.  And the Founders were just as leery of a mobocracy of the majority as they were of the monarchy. That’s why the U.S. Constitution limits the powers of the majority and demands supermajorities to change those constraints.

The Founders said there could be no bill of attainder, no ex post facto laws, no denial of habeas corpus. Property may not be taken by the majority without just compensation. The majority may not take away free speech or religion or guns or liberty.

“The accumulation of all powers, legislative, executive, and judiciary in the same hands, whether of one, a few, or many, and whether hereditary, self-appointed, or elective, may justly be pronounced the very definition of tyranny.”