This Is America; Kaepernick Is Free To Be As Stupid As He Wants

This Is America; Kaepernick Is Free To Be As Stupid As He Wants
N&V Staff 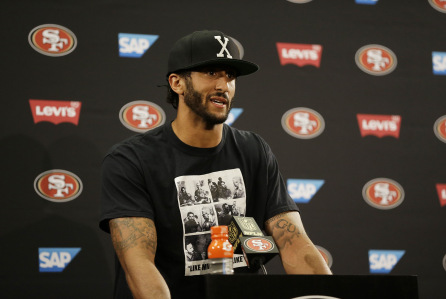 (Fred Weinberg, Penny Press) The greatest thing about the United States of America is that every citizen in the land—whether or not they know it—is empowered.  My late father used to explain that to me by saying that every little boy or girl in this country can grow up to be President—or anything else they want to be.

That is a two edged sword.

If you want to show off the fact that you are, indeed, a blithering idiot, there is really nothing to stop you.

Such is the case with San Francisco 49ers backup quarterback Colin Kaepernick who, believe it or not, has a degree in business management from the University of Nevada at Reno which is a real school, unlike UNLV which is a high school with ashtrays.

In the National Football League, a quarterback can go from hero to goat in a single season. That happened in 2015 with Kaepernick.  After coming into the league in 2011, taking over for an injured Alex Smith and over a three year period leading the Niners to their sixth Superbowl appearance in 2014 (they lost), he needed surgery and sat out much of the 2015 season.

This season, he was on the verge of being cut or traded when, inexplicably, the Niners kept his nearly $12-million salary on the payroll as a backup.

They may be regretting it now.

Last week, Kaepernick, refused to stand for the national anthem before a preseason game against the Packers and made a complete fool out of himself by saying almost incoherently “I am not going to stand up to show pride in a flag for a country that oppresses black people and people of color. To me, this is bigger than football and it would be selfish on my part to look the other way. There are bodies in the street and people getting paid leave and getting away with murder.”

OK, schmuck.  How about a country which pays a backup quarterback nearly $12-million a year and makes it possible to say stupid stuff like you just said?

Here’s a question for Mr. Kaepernick.

How much have you done to help fix Chicago where, starting with roughly the time that you sat down for our national anthem until Monday, ten people were killed and at least 57 others were wounded in shootings across the city—most of them black, shot by other blacks?  And did I mention that Chicago—even after the McDonald decision at the Supreme Court, still has the tightest gun laws in the nation?

Have you spent anything from the well deserved $12-million a year you make for riding the pine to help fix that situation?

Have you done anything to say to black kids who may look to you as a role model—yeah, even backups can be role models—that real men don’t make babies and then abandon them before they are born? You know, like 72% of the men in the black community do.

Have you told those same young black kids that aiming a gun at a policeman is probably a death sentence?

Or are you just another rich punk who is trying to stay relevant?

Oh, and here’s another question.

Are you going to burn down your own house?

Because, in cities like Chicago, Baltimore and others, many of those people you think you’re helping out by not getting off your dead ass to show some respect for the nation which allows you to act like a three year old are perfectly willing to do just that.

And, finally, do you remember the Dixie Chicks?

They used to be a very successful group of country recording artists.

Until they told an audience in Great Britain that they were ashamed of coming from the same state as President George W. Bush.

Whereupon they learned the same lesson that I suspect you are about to learn.

Which is that having freedom of speech does NOT protect you from the results of saying and doing something incredibly stupid.