This Move Could Force A Vote On Obamacare Repeal 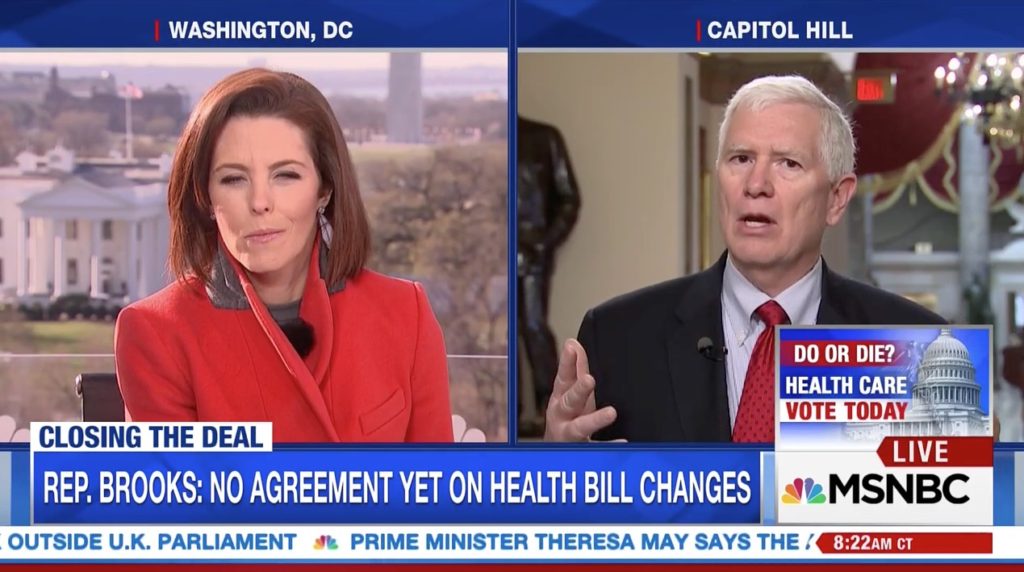 (Juliegrace Brukfe, The Daily Caller News Foundation) – House Freedom Caucus Member Rep. Mo Brooks of Alabama said he plans to force a vote on a full repeal of the Affordable Care Act using a procedural tool that could cause some major headaches for GOP leadership.

Brooks — who introduced a one-sentence bill to repeal the Affordable Care Act Friday — said he’s gearing up to file a discharge petition, noting he has to wait 30 days before he can start collecting signatures. If he is able to get 216 of his colleagues to sign on to his efforts, the measure would then be brought to the floor for a vote.

The move comes after the leadership-backed Obamacare repeal bill was pulled from the floor Friday due to a lack of consensus in the party. Brooks, who voiced his opposition to the measure along with several other members of the HFC, argued the bill resembled Obamacare too closely. Negotiations taking the bill in conservative direction led to the loss of the support of moderates, leading to a lack of votes for its successful passage.

Brooks said the discharge petition would provide the American public the opportunity to see which members are serious about repealing Obamacare.

“These Republican congressmen who publicly oppose Obamacare yet support it behind closed doors constitute a ‘Surrender Caucus’ that hopes the Obamacare issue will simply go away,” Brooks said in a statement after the bill was pulled. “Inasmuch as ‘Surrender Caucus’ Members are in key legislative positions, I will file a discharge petition to by-pass their blockades in hopes of forcing a House Floor vote. ”

According to Brooks, members would be able to prove to constituents talk of repealing the ACA is more than a campaign promise.

“Those congressmen who are sincere about repealing Obamacare may prove it by signing the discharge petition,” Brooks continued in the statement. “At a minimum, the discharge petition will, like the sun burning away the fog, show American voters who really wants to repeal Obamacare and who merely acts that way during election time.”

The measure has a nearly impossible route to passage due to push back from moderate members and the likelihood of a filibuster in the Senate.

Brooks has also not sold all the members of the House Freedom Caucus on the idea, with HFC Chairman Mark Meadows telling Politico there are no plans on the group advocating for the bill to be forced for a vote.

The House GOP conference met Tuesday morning to discuss their path forward on health-care reform, with members across the board assure they are committed to repealing and replacing the Affordable Care Act.

Leadership said they are looking to work with lawmakers throughout the party on a bill they can all get behind.