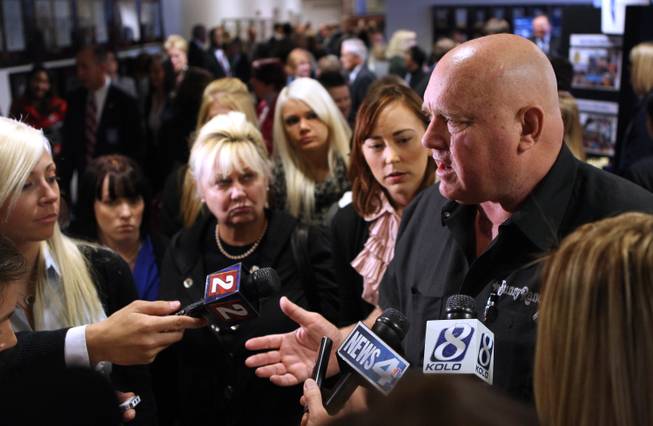 (Mick Akers, Las Vegas Sun) – Although many visitors to Las Vegas think prostitution is legal in the city, the fact is it isn’t. The world’s oldest profession can legally be found in eight of the 16 counties in Nevada, all of which are rural.

Two of those counties, Nye and Lyon, are home to various brothels, many of them owned by self-proclaimed pimp Dennis Hof. Hof said he has 540 contracted working girls and 230 employees across his establishments in the state.

Star of HBO’s “Cathouse,” Hof has been in the limelight over the years, most recently when former NBA and reality-show star Lamar Odom overdosed at Hof’s Love Ranch South, just outside of Pahrump. But now he’s getting attention for the solution he sees to curbing sex trafficking in Las Vegas: legalizing prostitution.

Why did you publicize your views on trafficking?

There are more than 3,000 active pimps and somewhere around 32,000 girls who come to Las Vegas every year to apply their trade. … It’s been estimated that there are 300 girls under the age of 16 that are being trafficked all the time. You’ve got pimps having shootouts on the Strip killing each other. You have a pimp kill a couple of girls right in a casino parking garage. It’s out of hand. Las Vegas is the sexual cesspool of America.

What other issues does illegal prostitution cause?

Sexually transmitted diseases in Las Vegas are way up, partially due to illegal prostitution. There’s also millions of dollars a year in property crimes. More interestingly, studies say that only 20 percent of the people involved in property crimes or identify theft with prostitution report it to the police, because most of them don’t want any trouble in their life. It’s disgusting, and something needs to be done about it.

N&V StaffFebruary 15, 2022
Read More
Scroll for more
Tap
Nevada GOP Legislator Proposes Banning the “Uber of Eyeglasses”
The shocking moment a thug in an Eeyore onesie body slams a guitar-wielding man on the Vegas Strip and knocks him out cold