To VMT Or Not To VMT

To VMT Or Not To VMT
N&V Staff 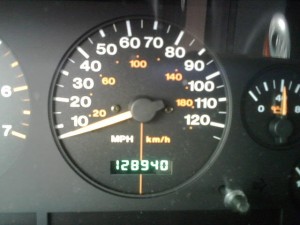 NDOT, as well as its counterparts in several other states, is studying an alternative method to the current gasoline tax of collecting funds to pay for road repair and construction. Revenues from fuel taxes have not kept pace with the increases in construction costs. These agencies are concerned with an even greater loss of tax revenue as vehicles become more fuel-efficient and as hybrid, electric and other alternative-fuel vehicles become increasingly prevalent.

NDOT is studying ways to implement a system in which fees are paid based upon the number of miles traveled (vehicle miles traveled, VMT) rather than the amount of fuel purchased. About a dozen NDOT employees, researchers and consultants were on hand to explain the program and answer questions.

The representatives stated the intention was not to add the VMT fee to the current taxes but to replace the gasoline tax with the VMT fee. They also indicated that, because of the interest of many other states and the federal government in the VMT fee, there was a high likelihood that some sort of system would be put into place within the next few decades but it would not be a quick transition. Thus it was important for Nevada to study VMT and have a seat at the table instead of having a system imposed on the state, they claimed.

This meeting was part of Phase 2 of a projected three-phase study, with Phase 1 completed last year. The public comment during Phase 1 was overwhelmingly focused on privacy concerns as the original plan proposed placing tracking devices in vehicles. This idea was immensely unpopular and was the subject of heated criticism.

The agency claimed to have responded to those privacy fears. In Thursday’s meeting, a video prepared by NDOT, the documents and displays available and all of those representing the agency stressed that the vehicle-tracking element was no longer under consideration.

The latest plan would employ devices to read a vehicle’s odometer, with a number of methods to determine mileage and tax liability being considered. The researchers at this event allayed privacy concerns by stating the system would not relay vehicle or driver information and would only be able to read the mileage since the last gas purchase.

One proposal would charge vehicle owners each year when the vehicle was registered. The odometer reading taken during the smog test could be used.

Another would allow the owner to pay a flat monthly fee for eleven months each year. The final payment would be made at the time of registration from an actual odometer reading and would be higher or lower than the other monthly fees based upon actual mileage.

The third proposal would use a device connected to the gas pump that would read the odometer and charge the VMT fee at each fill-up. NDOT has installed a prototype device in five vehicles and has configured a pump at a gas station in Las Vegas to test this system.

The NDOT representatives indicated it may be impractical for Nevada to implement a VMT tax unless adjacent states did so as well. Several problems could arise if Nevada were the only one to use such a system.

Out-of-state vehicles may not be equipped with the proper devices to calculate the mileage and tax and so drivers might be able to avoid paying it. Nevada residents travelling to other states might be charged upon returning to Nevada for driving in states in which they also paid gasoline taxes.

There were additional considerations that the current phase of this study is not addressing. Among these are any type of variable-rate system, such as charging lighter, more fuel-efficient vehicles a lower rate than larger vehicles that put more wear and tear on the roads or a system that charged different rates during higher-use times.

Nevada is one of about seventeen states currently studying a VMT fee system to replace the current fuel tax. These states are concerned that the falling revenue from more fuel-efficient vehicles will not be sufficient to cover their road repair and construction needs. NDOT’s current study is intended to find a solution that will provide sufficient revenue while addressing concerns of the public, such as privacy. Public comments will be accepted via mail or email through 5 p.m. Friday, August 12, 2011.

N&V StaffSeptember 20, 2021
Read More
Scroll for more
Tap
Transfer Of Funds To Scholarship Program May Have Been Proper
Education Excellence Closes All Gaps