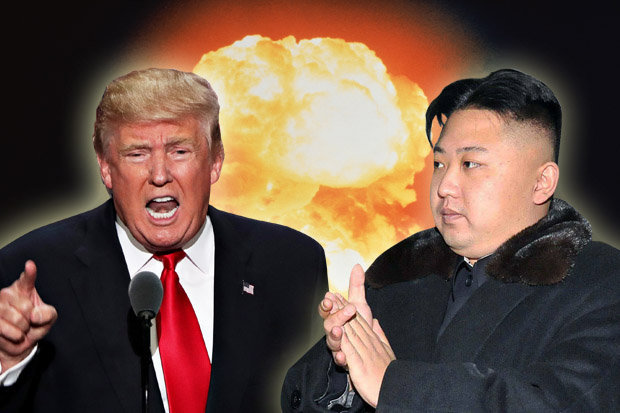 “Is Trump crazy or crazy like a fox?”  North Korea’s threat to target Guam with nuclear missiles prompted President Trump to threaten Kim Jong Un with “fire and fury” and a military that is “locked and loaded.” Is Trump spoiling for a fight?

Some Trump insight: in 1999 he told Tim Russert “The biggest problem this world has is nuclear proliferation”.  He warned North Korea would have nuclear weapons “within three or four years.”  In 2003 North Korea announced it had nuclear weapons.

From the Washington DC “swamp” the response to Trump’s belligerence was that the situation calls for diplomacy and negotiations, not trading insults with Kim.  Really?  Let’s take a look at history.

In September, 1938, to avoid war, the British and French “negotiated” with Hitler by allowing him to occupy the German-speaking areas of Czechoslovakia.  Six months later he occupied the whole country.  Eleven months later Hitler invaded Poland knowingly triggering war with Britain and France.  Eight months later France surrendered and the British barely saved their skins, evacuating back to England from Dunkirk.

In 1941 the US embargoed steel shipments to Japan because of its aggressive invasion of Manchuria and China.  Heavy negotiations were going on between the US and Japan in an effort to avert war.  The US had broken the Japanese diplomatic code but no information was ever found about an attack on Hawaii.  The US deemed it impossible for Japan to maneuver six carriers and their escorts clear across the Pacific without being spotted.  But when negotiations became fruitless the Pearl Harbor attack signal was given and the rest is history.  By pure luck the three US Pacific Fleet carriers were elsewhere or that war might have ended differently.

In 1950 hordes of North Koreans poured into South Korea, threatening to drive opponents into the sea.  President Harry Truman didn’t try to negotiate; he sent  US forces to Korea without bothering to ask Congress.  He also arranged for the United Nations to be the nominal belligerent, bringing numerous allies to fight along with US troops.  It was only when the original border was restored at the 38th parallel that a truce was sought and negotiations begun.

During the 1980s Libya engaged in a continuing pattern of terrorist attacks including downing a Boeing 747 packed with passengers and a bomb attack in Berlin that killed a US serviceman.  President Ronald Reagan scrambled US Air Force, Marine and Navy warplanes to decimate Muammar Gaddafi’s terrorist training camps in Libya.  The result was Gaddafi’s retirement from the terrorism.