Trump with a sense of humor

Trump with a sense of humor
Jim Clark

Trump-watching Republicans who cringe every time the news comes on should apply a keen sense of humor to what the media and the Democrats say about President Trump.   There’s a relatively new comic strip called “Pearls Before Swine” which features talking animals as well as humans.  Each animal is portrayed as having a distinct character and, not surprisingly, the chief cynic and narcissist is played by the rat. 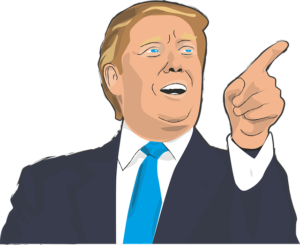 A recent offering shows “Rat the President” and an aide asks:  “How are we today, sir?”  President “Rat” responds:  “Sad.  The press is still saying mean things about me.”  The aide responds: “Well, that’s their First Amendment privilege.  It’s right there in the Bill of Rights.”  President Rat responds:  “I thought that’s what you’d say so I had the National Archives bring me the actual document . . . and I crossed that part out.  And now it just looks like a big founding father boo-boo.”  The aide sighs: “Oh lord”

Remember, Trump went to Washington to “drain the swamp” and he can’t do that if he behaves like a buttoned down Mitt Romney.  To counter all the ingrained special interests which have attached to Washington DC like barnacles he has to employ more head fakes than an NBA basketball team.  Or these really head fakes?

Are the unexplainable pivots in his behavior artfully executed just for public consumption or are they the product of a disordered mentality?  For example at the time of his inauguration, when the Russia collusion claims were just emerging, he gave his former opponent, Hillary Clinton, a pass.  As his fans chanted “lock her up” readers will recall that just before the election former FBI Director James Comey very publicly all but indicted her for violation of the Espionage Act.  He eschewed prosecution only because he found gross negligence but no specific intent to commit a crime.  Trump told his base that she had “been through enough”.  His attorney general appointee, Jeff Sessions, echoed his boss telling Congress: “In a democracy we don’t prosecute our opponents.”

This, despite Clinton’s criminality unearthed by Comey and the yet untouched juicy target of the Bill, Hillary and Chelsea Clinton Foundation whose public tax return shows $34 million spent on salaries, $50 million spent on “other expenses”, travel of $8 million and “meeting expenses” of $12 million while “charitable grants” amounted to only $5 million.

When Comey then turned on Trump and stealthily engineered appointment of a special counsel to investigate alleged Russia collusion Trump reversed course and publicly harangued Sessions for recusing himself from any Russia investigation and for failure to investigate Hillary Clinton for “crimes and Russia relations”.

So was Trump’s about-face on Sessions just a “head fake” for public consumption or the product of a mind incapable of consistency and loyalty to those loyal to him?   Some of the media and some Democrats think he’s crazy, others crazy like a fox.  The jury is still out on that.

The Chicago Tribune recently published an interesting opinion piece to the effect that Trump may secretly regret his choice of Mike Pence as vice president.  Columnist Steve Chapman opines that Trump’s erratic behavior coupled with Special Counsel Robert Mueller’s investigation make impeachment a real possibility if congressional Republicans decide they would rather have Pence in the White House.

Chapman reasons that Richard Nixon’s “highly flawed” vice presidents, Spiro Agnew (who was indicted and found guilty of corruption) and Gerald Ford (nice guy but dumb) were actually an “insurance policy” because GOP congressional members would prefer “Tricky Dick” to either vice president in the White House.

Pence, however, is imminently acceptable to the GOP majority.  Democrats see Pence as a “right wing puritan” but preferable to what Chapman describes as: “an unpredictable, thin-skinned narcissist” who might nuke North Korea or Iran.

Remember that Chinese curse:  “May you live in interesting times.”