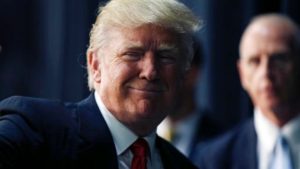 Both Donald Trump and Hillary Clinton were invited to visit Mexico by Mexican President Pena Nieto.

Then, in a serious policy speech last night in Phoenix after returning from Mexico, Trump laid out a comprehensive 10-point “America First” immigration reform plan for the United States.

He declared there will be no “legal status” or “citizenship” for any illegal who does not return to his or her country of origin and apply to come to the U.S. legally.  In other words, no amnesty.

How can anyone other than an illegal alien argue with that?

I’ve thought for a long time that Trump was going to win in November.

N&V StaffJanuary 4, 2022
Read More
Scroll for more
Tap
Hillary has a very healthy Bridge to sell you
Phyllis Schlafly: My Remembrance of a Conservative Giant