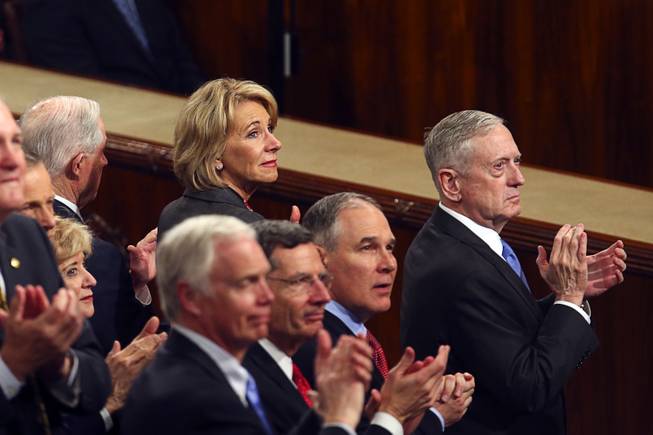 Betsy DeVos, the education secretary, during President Donald Trump’s address to a joint session of Congress in the House Chamber in the Capitol, Feb. 28, 2017. (Courtesy: Al Drago/The New York Times)

(Yamiche Alcindor, Las Vegas Sun) – President Donald Trump, returning to a promise that won him cheers on the campaign trail, signaled in his first address to Congress on February 28, 2017 that he will move aggressively to allow more public school students to use tax money to pay for tuition at public charter schools, private schools and even religious schools.

At rallies last year across the country, Trump said over and over again that he would use the nation’s schools to fix what he described as failing inner cities and a virtual education crisis that most hurts black and Hispanic children. In North Carolina, he called school choice “the great civil rights issue of our time.” In Florida, he declared that “every disadvantaged child in this country” should have access to school choice.

And, at a Washington gathering of conservatives, he said that under his administration, “money will follow the student to the public, private or religious school that is best for them and their family.” In his speech on Tuesday, Trump reiterated those pledges, and in doing so backed his controversial education secretary, Betsy DeVos, who has built her career on promoting voucher programs.

“I am calling upon members of both parties to pass an education bill that funds school choice for disadvantaged youth, including millions of African-American and Latino children,” Trump said during the joint session of Congress, to applause from many Republican lawmakers. “These families should be free to choose the public, private, charter, magnet, religious or home school that is right for them.”