Trump’s Speech Wasn’t ‘Dark’ or ‘Angry.’ The Media Is Out of Touch. | The National Interest

Trump’s Speech Wasn’t ‘Dark’ or ‘Angry.’ The Media Is Out of Touch. | The National Interest
N&V Staff 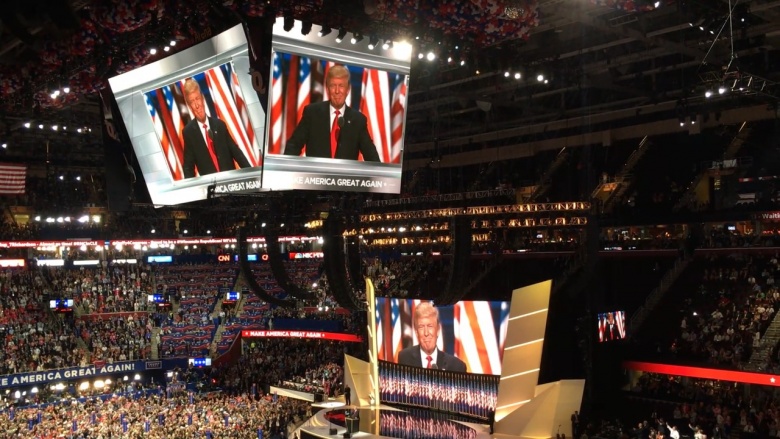 (Peter Navarro, The National Interest) Either the mainstream press doesn’t get Donald J. Trump—or its poison pens are simply out to get him. Exhibit A is last week’s dour coverage of one of the most electrifying presidential nomination acceptance speeches in the last thirty years.

I was at the Cleveland arena Thursday night where this history was made, and I was particularly revolted by Friday morning’s spin from two of the biggest Horseman of the Trump Apocalypse. The New York Times castigated the speech as “dark” and “angry” while the Washington Post labeled it “a dire portrait of a lawless, terrorized nation.”
In truth, there is a profound disconnect between Trump and much of the mainstream media—even as a solid majority of the electorate enthusiastically embrace Trump’s message. For example, when Trump calls for a ban on Muslim immigration, journalists quickly get their laptops in a twist.

Trump correctly sees, however, an American government ill-equipped to properly vet a flood of Muslim refugees. Ergo, a temporary ban on Muslim immigration from well-targeted countries coupled with “extreme vetting” constitutes a rational risk-management tool in a post-9/11, ISIS world where beheadings, bombings and random mass shootings are now commonplace.

A similar disconnect exists with a candidate who openly proclaims his love for waterboarding. Far too many journalists roll out the one-dimensional “torture doesn’t work” critique rather than understand the more complex use of waterboarding and other enhanced interrogation techniques as a necessary and often effective method to extract information from people who want to place nuclear bombs in our cities and poison gas in our subways.

Still a third disconnect arises in the realm of foreign policy. When Trump declares our allies must pay their fair share of the burden of defending Europe or Asia, journalists immediately spin cataclysmic visions of crumbling alliances exploited by Russian and Chinese aggressors.

Trump knows America can no longer afford to pay a disproportionate share of the alliance burden. Unless this “free riding” stops, these alliances—from NATO to Asia—will crumble for lack of both funds and full commitment. The media—and the foreign-policy establishment—would do well to wake up to this reality.

Journalists also often conflate Trump’s disdain for the futile war in Iraq and flooding the Middle East with American troops with the false assertion of Trump’s weakness and isolationism. Trump simply wants the days of America’s regime change and nation-building to be over. All we have gotten is “chaos” in Iraq, Libya “in ruins,” Syria “engulfed in a civil war,” Iran “on the path to nuclear weapons,” and a Hillary Clinton legacy of “death, destruction, terrorism and weakness.” So much for Hillary the foreign-policy expert.

As for Trump’s pledge to slap stiff tariffs on any countries using unfair trade practices like currency manipulation and to rip up “trade deals that strip our country of its jobs,” the media foolishly brands this as “protectionist” and warns of a “trade war.”

Trump knows, however, the U.S. economy will never resume robust growth until we eliminate our massive trade deficit, particularly with China—which Trump correctly brands as the biggest cheater on the planet. Ergo, Trump will impose defensive—not protectionist!—tariffs on any American trade partner that cheats. That will end the undeclared trade war America now finds itself in—not start a new one.

Finally, Trump’s speech reiterated his promise to “build a great border wall to stop illegal immigration, to stop the gangs and the violence, and to stop the drugs from pouring into our communities”—a pledge that many in the media invariably brand as racist.

Here, however, is the real racism of the Obama-Clinton immigration policy: It is the African-American and Hispanic-American communities at the very tip of the illegal immigration spear, suffering mightily from high unemployment and crime rates—a fact all the more ironic with the first black president now occupying the Oval Office.

As Trump ended his speech last Thursday night, the mood in the arena was anything but dark and pessimistic. Instead, it felt far more like a “morning in a America” Reagan moment as Donald J. Trump promised to take throw off the shackles of political correctness and take all necessary measure to make America “strong,” “proud,” “safe” and “great” again.

The voters in November would do well to accept this man at his word—and appropriately discount what will be a flood of false, out-of-touch media narratives from now to November.

Peter Navarro is a public policy professor at UC-Irvine. He blogs at www.nationalinterest.org