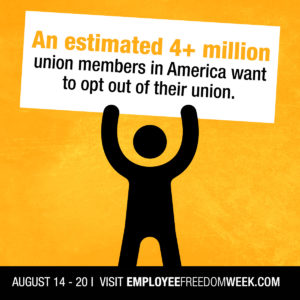 (Michael Schaus, Nevada Policy Research Institute) A new national survey indicates that nearly 30 percent of union members would opt out of union membership if they knew they could keep their job and not face any penalties.

The survey is part of National Employee Freedom Week (NEFW), an annual national campaign that informs union members about their workplace rights, including their right to exit union membership. NEFW runs Sunday, August 14th through Saturday, August 20th and consists of more than 80 organizations in over 35 states.

Responding to charges by labor leaders that opting out of membership makes employees into “free riders,” the NEFW coalition conducted additional state-specific surveys to test support for a new policy known as “Worker’s Choice” — a policy that would allow workers who opt-out of paying membership dues to represent themselves in negotiations with their employer.

“No workers should feel trapped in their union. It’s not fair to them, and it’s not fair to the union,” explained Schaus. “This year’s poll results show that, nationally and locally, majorities support this concept of worker’s choice — letting employees decide for themselves whether or not they will belong to a collective bargaining unit.”

In addition to educating union members about their rights, NEFW also helps them exercise these rights. The NEFW website features an interactive map that includes information on opt-out windows, sample opt-out letters, and information about union alternatives.

The Center SquareApril 21, 2020
Read More
Scroll for more
Tap
Catherine Cortez Masto thinks photo op hides fact she has not worked in private sector in more than 20 years
This Is America; Kaepernick Is Free To Be As Stupid As He Wants