Under pressure from Hardy, long-overdue Pahrump VA clinic back on track

Under pressure from Hardy, long-overdue Pahrump VA clinic back on track
N&V Staff 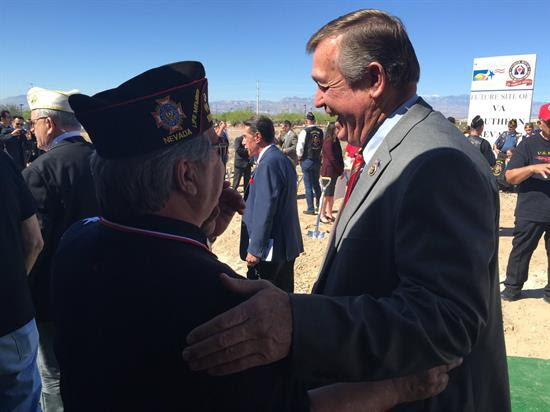 NORTH LAS VEGAS — On Wednesday, Congressman Cresent Hardy (NV-4) announced renewed progress on the Department of Veterans Affairs’ long-delayed clinic for the nearly 10,000 veterans in Pahrump and across Nye County, who have been left waiting years for better, more accessible healthcare closer to home.

“Before I took office, I promised veterans in Pahrump this new clinic would be a top priority, and I haven’t backed off since,” Hardy said. “We’re one step closer to seeing that promise fulfilled.”

The VA today awarded a contract to move the project forward, after unabated engagement and pressure from Congressman Hardy and his staff for the last seven months.

“Today is a huge victory for veterans in Nevada’s 4th Congressional District, and I’m not giving up until this clinic is built and fully operational,” Hardy added. “The delay to award this contract must not be followed by delays in construction, and I’ll personally follow its progress. The VA owes it to our veterans to keep this project on track, and I won’t accept anything less.”

Veterans from Pahrump and the surrounding area expressed excitement at the announcement, and thanked Congressman Hardy for his efforts.

“This is great news for Pahrump veterans, and I’m thankful for Congressman Hardy’s ceaseless efforts to fight for us,” said Carl Jones, commander of the Disabled American Veterans Pahrump Chapter 15. “The fight doesn’t end here — now we need the VA to build it quickly and find the right staffing to make it operational.”

“Thanks to Congressman Hardy’s engagement with the VA, we’re getting closer to better healthcare for vets in Pahrump and Nye County who have waited far too long,” said Tom Vick, commander of the Pahrump VFW Post 10054. “We’re grateful Congressman Hardy sees how life-changing it can be for a veteran to have better care closer to home.”

“Our veterans served without question. They gave their all to preserve our freedom, and Congressman Hardy and I agree we must do no less in providing them the best quality, most accessible healthcare possible,” said Nevada State Senator Pete Goicoechea.

“This clinic will in no way pay back what our veterans sacrificed for us, but I join Congressman Hardy in fighting for the best possible healthcare for our Nye County veterans,” said Nevada State Assemblyman James Oscarson.

The old Pahrump VA clinic was the first VA medical facility Congressman Hardy directed his staff to visit after taking office in January, and Hardy demanded progress on the new clinic in a May letter to U.S. Secretary of Veterans Affairs Robert McDonald.

Congressman Hardy also visited the VA Southern Nevada Healthcare System multiple times, met with top VA regional leadership, and personally directed his staff to engage all levels of the VA bureaucracy, in pursuit of a resolution to the matter.

“I’ve been working hard to get to the bottom of the VA’s inexplicable delay to better care for vets in Pahrump and Nye County,” Hardy said. “I have not ceased to apply pressure to the highest levels of the VA, demanding progress for the sake of veterans who in many cases drive more than an hour to get the care they’ve been promised.”

The contract award sets in place a timeline of 18 to 24 months from groundbreaking to completion for the Community Based Outpatient Clinic (CBOC). VA officials have yet to set a date for an official groundbreaking.

Congressman Hardy’s predecessor in the 4th District, as well as Senator Harry Reid, had each promised progress on the clinic in years past, but ultimately could not cut through the red tape, and the project continued to languish.

The contract solicitation was announced by the VA more than three years ago.