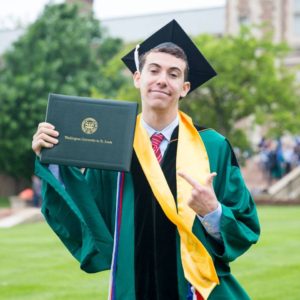 (Chuck Muth) – Jon Ralston – Nevada’s #2 liberal blogger who no longer has a TV show – breathlessly “reported” recently that some twenty-something, left-wing Bernie Sanders supporter – who may or may not still be living in his mom’s basement in Los Angeles – distributed a slick flyer (written and paid for by?) criticizing the proposed Las Vegas Dome to state legislators.

In it Alex Leichenger declares the stadium project a “scam.”

As one of Sanders’ socialist disciples, one would expect that young Mr. Leichenger would hate corporations – you know, those thingies that create jobs for people not lucky enough to land gigs as liberal community organizers – and he does not disappoint…

“It’s a gargantuan waste of money,” Millennial Al declares in his flyer, “funneling funds that could be spent on housing, health care or other essential public services to the wealthiest members of society.”

The fact is it’s the wealthiest members of society – who liberals despise – that create the jobs and tax revenue that pays for “essential public services.”

The inconvenient truth is that poor people don’t create jobs or wealth.  Successful business people who start and run corporations do.

Yes, the kid is an idealistic ignoramus – but there’s always hope that he’ll grow out of his naiveté when he gets a real job and has to pay his fair share.  So we’ll cut him a little slack.

Here are two other facts…

1.)  The stadium proposal isn’t anywhere near finalized yet, so to declare the project a “scam” before even knowing the details is a case of premature exacerbation.

That is, at the very least, simple-minded.

“I was skeptical of this whole thing (Las Vegas Dome stadium project) for a variety of reasons, but the more I hear about it the more I like it.  The main thing is it’s going to be funded by room taxes, so, essentially, no citizens in Nevada will have to pay for it.” – Assemblyman Ira Hansen (R-Washoe), Reno Gazette-Journal, 8/12/16