Veterans Day Is For Veterans, Not Politicians

Veterans Day Is For Veterans, Not Politicians
N&V Staff 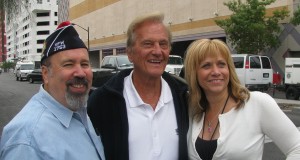 (Alan Stock) – The Las Vegas Veterans’ Day Parade was held on Friday, November 11th on 4th Street in old downtown. It was a bright spot to an otherwise overcast morning. To say it was a success would be an understatement. By all counts, there were in excess of forty thousand people attending this annual salute to all veterans, past and present.

Las Vegas hosts the largest Veterans’ Day Parade in the nation afterNew York.Las Vegas, the entertainment capital of the world is the second largest city to honor our men and women in uniform.

The National Anthem was sung this year by one of the great pop singing icons from the 50’s and 60’s and beyond, Pat Boone. Pat is a gracious, patriotic man of faith and requested no payment for his participation. We have had other local entertainers request as much as $5,000 to just show up and honor us with their presence.

There were various sponsors to this parade that also featured thousands of ROTC students from around theLas Vegas Valley. Humana was gracious in their generous support (thank you, Dixon Keller) and media sponsor this year was Newstalk 720, KDWN (a Beasley Broadcast Group). Cox Communications broadcast the entire parade and recorded it for several subsequent re-broadcasts (a tip of the hat to Steve Schorr).

Military veterans from VFW Post 1753 under the guidance of Parade Chairman Bill Stojack worked tirelessly to produce the biggest and best parade of any kind that Las Vegas has witnessed. Bill and crew made Las Vegas shine in the eyes of the entire country; a big salute to the entire VFW Post 1753.

Up until now, I’ve been very kind about those who participated in or showed up at the Veterans Day Parade. I am compelled, however, to point out a couple of sore spots that worked against the best efforts of parade organizers and supporters.

We do not choose to promote any political point of view nor any candidate for any elective office. In the past, we have had candidates for political office violate this long standing tradition and these folks have been asked to not participate in the future. We have made this policy known and have publicized such for many years. This year we had two glowing violators to this policy.

First, it was reported that Bruce L. Gale, a past losing candidate for a judgeship on the Las Vegas Municipal Court, was holding up a sign to “Vote for Bruce Gale for Judge.” This was seen and reported by several sources. He is apparently seeking to compete for another elective position. Shame on you, Bruce Gal,e for muddying the waters of an event that was not set up for your personal campaign gratification. You owe an apology to our veterans and all men and women in uniform.

Second, I witnessed congressional candidate Ruben Kihuen campaigning for his effort to represent congress. When he was asked to stop campaigning, he just smiled, waved and continued right on pressing the flesh and seeking votes. I have never seen him at a Veterans Day Parade before, and he chose to use this privately hosted event to seek recognition for…himself.

I do not know Bruce L. Gale nor do I know Ruben Kihuen. However, I do believe both of these men to be boorish and not as much concerned for veterans as for their own personal promotion. Both of these men need to rehabilitate themselves with veterans and all Las Vegans by immediately apologizing for this grievous error in judgment.

This is not a swipe at any political or judicial point of view. Regardless of one’s political persuasion, we ask that this parade unite us all in our support of veterans both past and present. Leave your partisan bickering and differences and campaigning at the doorstep to the parade. If you cannot do that, please enjoy the parade from the comfort of your living room on the Cox Cable access channel. Unless we hear from these men, they will not be welcome as entrants in future Veterans Day Parades.

God Bless our men and women in uniform and God Bless this great country of ours.

(Alan Stock hosts The Alan Stock Show Monday through Friday on 720 AM KDWN inLas Vegas. He is a proud member of VFW Post 1753, and for the past 12 years has been the Master of Ceremonies for the annual Veterans’ Day Parade inLas Vegas, the second largest Veterans’ Day parade in the nation.)

Why I support the 2nd Amendment

The Real Threat to America

The Real Reason for The War on Oil