Want to save the planet? Let the cows out

Want to save the planet? Let the cows out
N&V Staff 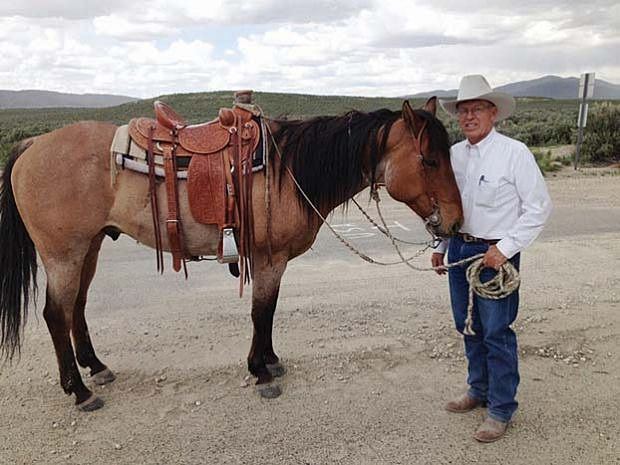 (Thomas Mitchell) – Once again the sagacity of cowboy philosopher Will Rogers has been proved: “It isn’t what we don’t know that gives us trouble, it’s what we know that ain’t so.”

Writing in the summer edition of Range magazine longtime ecologist Allan Savory notes that it is universally agreed that strict control on livestock grazing is needed to prevent turning our rangelands into barren deserts. But it ain’t so.

“In more than 60 years of research, neither I nor any collaborating scientists have found any evidence to support the idea that controlling livestock numbers prevents desertification,” writes Savory under the superlative headline, “Cows Can Save the World.”

In fact, Savory reports, complete removal of cattle accelerates desertification for two reasons. “First, most or all aboveground stems and leaves of perennial grasses die back every year,” according to Savory. “Unlike trees that also have leaf turnover, grasses cannot shed dead leaves and stems. Over millions of years such grasslands — soil life, plants, grazing animals and their predators — developed together in an amazing symbiotic relationship. The grasses needed animals grazing, trampling, dunging and urinating just as much as the animals needed plants.”

The writer, who is originally from Rhodesia but now makes his home in New Mexico, notes that most Americans live on the coasts where there is enough moisture for grasses to rapidly oxidize, but in the more arid climes gradual oxidation doesn’t allow adequate sunlight to reach ground level if there is no grazing. This results in grasslands weakening and nature striving to fill the vacuum with taproots plants — weeds or forbs, shrubs and trees if rainfall is high enough.

While this may sound like heresy to federal land managers and those whose experience with grass in limited to a backyard turf, it is something many ranchers have been saying for years.

The late Elko County Commissioner Grant Gerber often charged that federal agents are in thrall of the radical environmentalists, whose mantra is that the land should be returned to the pristine state before ranchers ruined it by trampling it with sheep and cattle.

But the truth is quite the opposite. It is those sheep and cattle that helped transform the Great Basin into a land hospitable for wildlife such as elk, deer, and sage grouse.

Gerber, who died in October of a head injury after his horse stumbled during a protest ride to Washington on behalf of ranchers being forced off federal public land, was fond of quoting from the diary of fur trapper Peter Skene Ogden who crossed Nevada circa 1828: “There were times when we tasted no food, and we were unable to discover water for several days together; without wood, we keenly felt the cold; wanting grass, our horses were reduced to great weakness, so that many of them died, on whose emaciated carcases we were constrained to satisfy the intolerable cravings of our hunger, and as a last resource, to quench our thirst with their blood.”

Only after the sheep and cattle came and trampled the earth and fertilized it and ranchers improved access to water, the region blossomed, Gerber contends.

Gerber explained in an interview a couple of years ago that this was because: “Along the Humboldt River it began to get a little better because as these wagon trains would come through the cattle would plow up the soil with their hooves, the oxen and the horses and the sheep. They’d fertilize it and they would knock down the sage brush and grind it into soil. Just like you do with your garden. Every year the soil got a little bit better.”

This is also explained by Ruby Valley rancher Cliff Gardner, who in an article in the Elko Daily Free Press in November, noted that between 1846 and 1853 an estimated 165,000 people crossed the Great Basin en route to California. They brought with them nearly 1 million cattle, sheep and horses.

“Think of the impact these animals must have had on the environment along the Humboldt and elsewhere during that period,” Gardner recounts. “But did things deteriorate — was the grass abused and depleted? Not according to the logs and diaries that were kept. Almost to a person, it was indicated that grazing conditions were improving — that there was more grass and feed found then, than had been found earlier.”

Grazing has transformed Nevada. Do we wish to see it revert to a pristine but barren state devoid of wildlife and vegetation?

N&V StaffSeptember 20, 2021
Read More
Scroll for more
Tap
The Dirty Dozen and Sellout Seven
Both sides slip sliding away from the political middle