We Need NASA AND Private Space Entrepreneurs, Not Obama Killing One Off

We Need NASA AND Private Space Entrepreneurs, Not Obama Killing One Off
N&V Staff 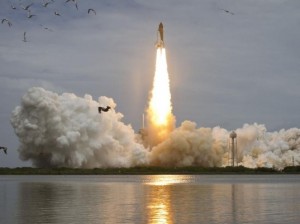 (Fred Weinberg/The Penny Press) – Last week on 60 Minutes, the program did a piece on what is, perhaps, the most undercovered story of this century.

CBS News pointed out that in our lifetimes, only four entities have launched an object into space and recovered it.

Russia, the United States, China and a company from California named SpaceX.

SpaceX—and its competitors—are the silver lining of one of the Obama Administration’s most incompetent decisions which was to end the Space Shuttle program and severely cut back NASA’s budget.

Coincidentally, I turned 60 last week and, watching the piece, it dawned on me that I came into the world following Sputnik, Yuri Gagarin, the flight of Ham, the chimp, who preceded Alan Shepard on a Mercury Redstone flight, the original seven US astronauts and the 20-year period between 1960 and 1980 when this nation literally raced the Russians and led the world into space.

And folks, for those of you who did not grow up in that era, NASCAR had nothing on this race.

Like most technically oriented young people, I knew just about every detail of the Mercury, Gemini and Apollo programs, didn’t ever miss a launch or a splashdown and knew in great detail who the people of the program were.

Chris Kraft, the legendary NASA flight director was just as big a hero to my generation as was John Glenn. So were the engineers who responded to those terrifying words from Apollo 13 command module pilot Jack Swigart, “Houston, we’ve had a problem” and brought those three astronauts safely back to Earth.

With a background like that, how could America scoff at a 40-year old self-made billionaire named Elon Musk who put $100,000,000 of his own money into SpaceX with a goal of commercial space travel.

However, it is a fact that Gene Cernan and Neil Armstrong, two of the most storied astronauts NASA ever suited up have done just that.

And young Musk, asked what he thought of the criticism was visibly shaken. “I was very sad to see that,” Musk told 60 Minutes correspondent Scott Pelley. “Those guys are heroes of mine, so it’s really tough. I wish they would come and visit; see the hard work that we’re doing here, and I think that it would change their mind.”

What Cernan and Armstrong don’t want to see is the demise of NASA and big government funded programs.

Neither do we. In terms of bang for the buck, it is exactly what government should be doing. Pure research. What individuals can’t do for themselves.

But the fact is that, today, rocket science is no longer the exclusive province of rocket scientists.

Musk is the young man who invented Paypal and sold it to eBay. He’s already had plenty of experience dealing with entrenched bureaucracies—like NASA. If you think dealing with NASA might be tough, try dealing with the Bank of America or Wells Fargo after you invent a way to game their systems. And, let me tell you personally, Paypal works. We use it in our business all the time.

The people who invented the space age, guys like Armstrong and Cernan, ought to know better.

People scoffed at them when they said we could go to the moon. I seem to remember a guy named Armstrong taking a first step on the moon.

Why would you scoff at a young man who merely wants to democratize the experience—just like he did for people who wanted to accept credit cards and move money around more efficiently than a big bank would let you.

I do remember the late Alan Shepard saying, “I wasn’t scared, but I was up there looking around, and suddenly I realized I was sitting on top of a rocket built by the lowest bidder.”

Musk freely admitted that he probably didn’t know what he didn’t know.

That’s not the point and, frankly, neither is safety.

We still need the big government bureaucracy and we also need guys with skin in the game like Musk pushing the ball towards the goal line.

What we don’t need is idiot savants like Barack Obama trying, at the same time, to destroy the space program and then take credit for guys like Musk.

N&V StaffOctober 4, 2022
Read More
Scroll for more
Tap
Democrats Discriminate by Relegating People to Niches
Equal Footing?: Nevada and Other Western States Got the Rug Pulled Out From Under Them