Weinberg: Feds Look, Act A Lot Like the Mob In Walters Case 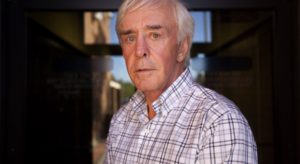 Billy Walters is known to be the greatest sports better in Las Vegas and the world. (Courtesy: The San Diego Union-Tribune)

(Fred Weinberg) – Other than the mob, what single entity gets the opportunity to pitch till they win in an attempt to destroy someone?

And it’s going after our friend Billy Walters again.

The Feds flat out loath Billy.  He — to them — is the O.J. Simpson of business.  They just know he’s guilty. The only problem is that not only have they never been able to convince 12 people of that but the “crimes” they keep charging him with are silly.  Running an illegal bookmaking operation from Las Vegas, money laundering, insider trading?

Billy is a big shot but they’re going after a guy with not only the resources to fight back but the will.

Just like Mark Cuban, who shoved some ridicules insider trading charges back down their collective throats, so will Billy.

Back in 1995, we bought KRLV in Las Vegas and I had the privilege of first meeting Billy at one of his golf courses where we were both involved in a Republican political fundraiser.

Billy may be a fearsome sports better who makes his successful bets by intensively analyzing every opportunity but he’s also the nicest guy in Las Vegas.

If there’s a charity doing good work, Billy is there to support it.  And he was never afraid to enlist his friends, both new and old, in helping those charities.

My experience is that he makes his money honestly because he is simply smarter than most people. Especially some of the people who hold down chairs in government buildings.

And then, there’s the question of results.

If Billy were not as successful as he has been, do you think there would have been any charges against him at all? This is a little like looking at a school class’s test results and saying they couldn’t be that good without cheating.  He’s that good.

The fact is that over the years, he has made the Feds look like Berosini’s chimps and they, in turn, have continued to come after him.

My guess is, despite the fact he is being charged in New York instead of Las Vegas this time, he will keep his record perfect against the Feds, if for no other reason, most jurors admire a guy who is really smart.

But at some point, people need to ask what exactly the Department of Justice is trying to do by spending its time and our tax dollars going after Walters as opposed to, say, the Sinaloa drug cartel, human trafficking from Asia, ISIS and the Democrats who run Chicago.

Whatever Walters has been charged with, over the years, the only thing which has actually been hurt are the feelings of the same Federal Prosecutors who took years to put thugs like John Gotti in prison and never charged ANYBODY who worked at the Bank of America or Wells Fargo during the mortgage crisis.

To the best of my knowledge, Billy Walters never screwed a homeowner out of his house or made the FDIC use Federal money to bail out a bank.

When the U.S. Attorney for the Southern District of New York can prove to 12 people that Billy Walters actually did something bad, he might get some sympathy from me.

Until then, he’s just another representative of the Obama administration extending the overreach of the Federal Government.