Who in the Hell is Jussie Smollett?

Who in the Hell is Jussie Smollett?
Penny Press

Where Did He Finish in Daytona? Because That’s a Question of Race 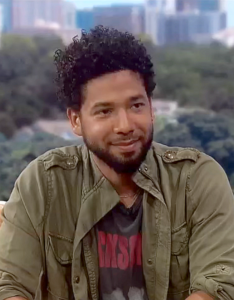 Could someone please tell me who in the hell is Jussie Smollett?

This little queen (for a day) is apparently an actor on a Fox TV Network show. I wouldn’t know. The only shows I watch on that network these days star Darryl Waltrip and Jeff Gordon and feature loud 8 cylinder engines. Simon Cowell and American Idol have come and gone.

It’s hard to miss the irony that 21st Century Fox owns the Fox News Channel along with the TV Network.

Its Executives must feel like Christian Scientists with appendicitis.

On one hand they spent last week declaring they weren’t writing Smollett out of the Fox Network show because he apparently faked a racist attack on himself trying to implicate supporters of the President while Fox News on the other hand was busy reporting on that phony attack. They acknowledged writing him out of the show near the weekend.

Smollett even managed to make Stephen Colbert funny for about 10 seconds. “Look, I’m no expert. But if you’re going to fake a white supremacist hate crime, hire two white guys.” Colbert was referring to the fact that the two people Smollett did hire were black Nigerian brothers who he paid with a personal check.

He even brought new respect for the Chicago Police Department which unraveled his fakery like peeling a banana.

Undoubtedly, Sergeant Hank Voight and his crew will get a chance to reenact what happened in an episode of Dick Wolf’s Chicago PD next season, ripped from the headlines. Wolf, could not possibly have dreamed up this scenario himself, but the truth is often stranger than fiction.

The current play by play is that Smollett was unhappy with his $20,000 per episode salary for a supporting role and, somehow, thought that casting himself as a victim to the President’s supporters would enhance his career. Apparently he never acted in a detective flick or he would have known better than to write a personal check to the guys he hired to attack him and, allegedly say, “This is MAGA Country” in, of all places, Chicago.

And when he got caught with his panties down around his ankles, his lawyers, after posting a $100,000 bond, released this statement: “Today we witnessed an organized law enforcement spectacle that has no place in the American legal system. The presumption of innocence, a bedrock in the search for justice, was trampled upon at the expense of Mr. Smollett and notably, on the eve of a Mayoral election. Mr. Smollett is a young man of impeccable character and integrity who fiercely and solemnly maintains his innocence and feels betrayed by a system that apparently wants to skip due process and proceed directly to sentencing.”

People who can see this clearly might reasonably ask what due process is Mr. Smollett not getting? He was arrested, arraigned, released on bond and is awaiting adjudication. He is neither running for Mayor nor has he been imprisoned. He will get a fair trial. This is still Chicago.

It’s been quite a week for Chicago, that Toddling Town.

Immediately after Smollett was arrested by the Chicago PD, so was R. Kelley. His apparent lapse in judgment was having sex with underage girls over the years as record company chiefs are occasionally wont to do. His lawyers are NOT releasing statements similar to Smollett’s.

Lawyer Steve Greenberg is more to the point. “I think all the women are lying. Yes. This has become, ‘Hey I can say R. Kelly did something, boom.” At least he’s not blaming the system outright.

There are far fewer political implications here and he also didn’t blame the President.

The big question here is has Smollett made it even more difficult for liberal media jerks to blame the President every time the sun ducks behind a cloud?

Maybe on CBS. Maybe on CNN. MSNBC? Not so much.

I guess I’ll have to watch Empire on Fox for at least one episode to see what the fuss was all about. Maybe I’ll do it after the Pennzoil 400 live from the Las Vegas Motor Speedway Sunday on…Fox.

If you want to have a debate about race, Empire is not the show you want to watch on Fox. That show would be NASCAR.