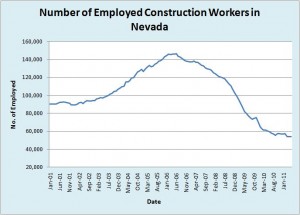 Misled by those contrived rates, business people invest in riskier, higher orders of production that, for the moment, appear viable, but actually are not.

This misdirected investment into capital goods creates “bubble” industries in areas such as the manufacturing of heavy equipment, new-technologies research or real estate development. Into these bubbles, far more workers are drawn than consumer demand ultimately justifies. The false signals sent by artificial credit expansion create a wall of misinformation separating entrepreneurs’ planning from the price signals that would indicate what consumers really want. The longer this wall of separation is nourished with injections of new artificial credit, the greater these distortions become.

Eventually, as society’s capital and labor resources continue to go into industries for which there is insufficient consumer demand, the bubbles burst, leaving many individuals displaced and out of work.

This is what happened to construction workers in the Silver State. The mid-2000s housing bubble was particularly pronounced in Southern Nevada. As elsewhere, artificially cheap credit combined with congressional meddling in lending practices drove up the demand for housing and rapidly escalated prices. Moreover, Southern Nevada became doubly exposed when U.S. homeowners, witnessing the dramatic rise in nominal prices, began to borrow against illusory home equity to purchase boats, jet skis, vacation homes and trips to Las Vegas.

This cheap-credit-fueled consumerism — encouraged by Congress, the Bush White House and the Federal Reserve — saw Southern Nevada’s hospitality industry become so artificially profitable that workers came to Southern Nevada en masse, seeking employment in the region’s resorts and casinos. These immigrants added significantly to the region’s demand for housing — pushing up prices even faster than was seen across the nation. By late 2006, homes in the Las Vegas Metro Area were selling for 2.5 times what they sold for just six years earlier, according to the Case-Schiller Home Price Index.

Responding to this sudden increase in housing demand — the result, again, of artificial credit — the ranks of Nevada’s construction industry began to swell. Between January 2002 and June 2006 the number of Nevadans employed in construction grew by 63.5 percent — going from 89,400 to 146,200. After the Fed’s credit illusions began to erode and it started to become clear that millions of people had overinvested in real estate development, Nevada’s construction industry began to expel workers even more rapidly than they had been hired. By April 2009, the number of employed construction workers had fallen back to 87,400 and would continue falling to 54,100 in June 2011.

The post-bubble decline in construction employment in the Silver State has become a hot topic among the state’s top politicians. During the 2011 legislative session, politicians introduced numerous schemes to increase the tax burden on most state residents so the state could channel more money toward the construction industry — supposedly creating more employment opportunities in the construction of public infrastructure. Jockeying for popular support, state lawmakers wanted to be seen “doing something” to put displaced construction workers back on the job.

Federal policymakers responded similarly in 2008 to the sudden collapse in valuation of mortgage-backed financial assets. They passed legislation authorizing the Fed to buy up these “troubled assets,” and bail out Wall Street investors who had invested too heavily in bubble industries.

Policymakers who, in many cases, genuinely wanted to keep workers employed and lessen the impact of recession, propagated these schemes. They didn’t recognize, however, that government’s own manipulation of interest rates had produced the problems, disproportionately allocating society’s capital supply into construction and finance sectors. Thus, their reflexive “solution” was using the coercive power of government to transfer even more capital to prop up industries that had been overbuilt vis-à-vis legitimate consumer demand.

The destabilizing influence of artificial credit can be corrected, however. The key is allowing a quick and orderly liquidation of capital that has been invested poorly — the very process that corporate bankruptcy laws are designed to facilitate. When policymakers prevent corrections within the capital structure through bailouts or other interventions, they ensure that labor unemployment will remain high. After all, capital is not being directed toward the production of things that consumers value.

When capital resources are allowed to flow to entrepreneurs whose plans reflect genuine consumer demand, those entrepreneurs’ projects will expand, hiring workers left unemployed in the recession’s wake.

To that point, the problem facing Silver State policymakers today isn’t how to boost construction employment. It’s that too many workers were led into the industry to begin with and the market was overbuilt. Intelligent policy would get out of the way, stop doing harm, and allow markets to operate — allocating resources away from the bubble industries and toward those that more accurately reflect consumer preferences.

Unfortunately, policymakers at the federal and state levels have demonstrated instead an eagerness to make taxpayers throw good money after bad. This type of intervention cannot cure joblessness.

To accomplish that task, the market must be allowed to function.