(Geoffrey Lawrence/NPRI) – Since the dawn of democratic government, politicians’ favorite path to retaining and/or expanding their power has been to shower voters with promises of things to be delivered for “free.”

President Lyndon Johnson won office with promises of a “Great Society,” wherein the elderly would have access to “free” or subsidized health care. President Obama promised to extend that benefit to everyone. President Franklin Delano Roosevelt went so far as to promise every American a good-paying job, a “decent home” and “protection from the economic fears of old age” — regardless of their own actions or decisions.

As a consequence of this vote-buying strategy, Americans have seen government confiscate more and more private wealth — a tribute to the fact that nothing of value comes “free.” Federal spending on transfer payments and entitlement programs has grown to consume more than 16 percent of annual gross domestic product, according to data from the White House. This is in addition to federal spending on national defense, infrastructure and other discretionary spending, as well as spending by state and local governments. 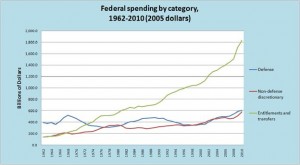 In short, the scope of life freely chosen by individuals has shrunk dramatically as past promises of things for “free” by politicians has effectively meant that more and more aspects of life have become socialized — part of the government’s ever-growing realm of compulsion.

Americans no longer have the freedom to use the fruits of their labor in pursuit of things they most value. Many are not free to plan for their own retirement, to decide how to insure against adverse health, or to decide in what manner to educate their children. Government regularly seizes their financial resources to fund collectivized programs that regularly yield sub-optimal results, while abolishing participants’ ability to choose for themselves. As society has succumbed to the overtures of politicians pursuing power, fundamental freedoms have been abandoned.

Yet, beyond the promises of tangible goods or services that capture media headlines, politicians for almost a century have touted something even more problematic: cheap credit.

To purchase the favor of those with entrepreneurial ambitions — farmers, small business owners, students and potential home buyers — politicians dangle subsidized credit before them. The U.S. Small Business Administration offers to back up to 85 percent of the principle for loans made to small businesses — in much the same way Congress implicitly backed the toxic mortgage assets encouraged and held by Fannie Mae and Freddie Mac.

Federal backing of private loans to small businesses lowers lenders’ concerns about potential default, making them more willing to lend at lower interest rates to less credit-worthy borrowers. The risk is socialized and borne by taxpayers — rather than the lenders directly involved in the transaction.

In the mid-2000s, SBA-backed loans accelerated dramatically as political backing conspired with artificially suppressed interest rates from the Federal Reserve. The Las Vegas Sun reports that 1,200 SBA-backed loans were issued in Nevada in fiscal year 2007 — up from 370, six years earlier.

But the fact remains that artificial credit sends false signals to investors about the amount of true savings available within society. As writ large in Nevada’s housing industry, skewed interest rates inspire the misallocation of precious capital resources, leading investors to believe that capital is far less scarce than actually is the case.

The Sun reports that, in the wake of recession, many potential entrepreneurs, having seen their credit ratings decline, are turning to personal savings to finance start-up business ventures instead of utilizing government-backed loans. The assumption behind the story appears to be that Nevada’s economy would be healthier if more SBA loans were being made.

It is true that small business development is a key driver of economic growth. Small businesses nationwide create 3 million net new jobs each year, on average, while large, established corporations tend to lose jobs over time. Small-business growth based on manipulated credit markets, however, means dangerous distortions in society’s capital structure — to the eventual detriment of everyone.

When entrepreneurs stake personal savings on a business venture, they assume their own risk instead of passing it off onto society at large. This is precisely the type of disciplined behavior that should be encouraged, not bemoaned.

Adam Smith, who many consider to be the “father of capitalism,” would certainly have emphasized the importance of savings and warned against politicians’ incessant offers of cheap credit. As he said in The Wealth of Nations, “What is prudence in the conduct of every private family, can scarce be folly in that of a great kingdom.”

Americans would do well to remember his advice. A nation built on savings and individual responsibility is a nation that can perpetually sustain growth. A nation chasing credit and socializing costs is headed for the trash heap.